The Mysterious Disappearance of Ray Sutton (Well, maybe not so mysterious after all.) 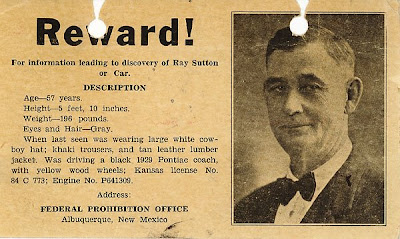 "On Aug. 27, 1930, Federal Prohibition Agent Ray Sutton filed his routine daily report from his post of duty, Clayton, N.M., to the deputy Prohibition administrator of the Albuquerque, N.M., Office. That would be the last report he ever filed.

By the following evening, when officials became suspicious by Sutton’s failing to file his daily report, a local sheriff searched his room at the Hotel Seaberg in Raton, N.M. The sheriff found Sutton’s personal effects and portfolio records, including his everyday topcoat. Sutton had not checked out of the hotel nor had he been seen there since Aug. 28. . ."

Go here and read the rest. I swear, as Charlie Quintard is my witness, I had nothing to do with it. I wouldn't be surprised if some of Aunt Jenny Brooks' descendants did though.

Hmmmm... Reminds me of a certain old gunmaker who made the entire Cheyenne BATF staff disappear out on the prairie in "Unintended Consequences".

Hmm...Were there any records of any tickets purchased during that day at the Dead Man Holler Tour Office?

Two years ago I would have felt bad for his family.

Today I'm glad he disappeared before he had a chance to breed more.

If only we could forward this to all government employees.


Well my name's John Lee Pettimore
Same as my daddy and his daddy before
You hardly ever saw Grandaddy down here
He only came to town about twice a year
He'd buy a hundred pounds of yeast and some copper line
Everybody knew that he made moonshine
Now the revenue man wanted Grandaddy bad
He headed up the holler with everything he had
It's before my time but I've been told
He never came back from Copperhead Road......