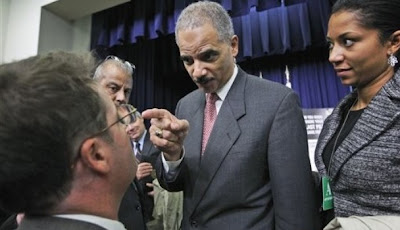 Post your answer for Jim in the comments here. I would like to solicit suggestions for dialogue for both Holder and his aide.

Remember, the actual dialogue which goes with this intimate moment of paranoia is:

As Holder's aide was escorting the attorney general offstage following his remarks Tuesday afternoon at the White House, a Daily Caller reporter introduced himself and shook Holder's hand. The reporter asked him for a response to the growing chorus of federal legislators demanding his resignation.

Holder stepped towards the exit, then turned around, stepped back toward the reporter, and sternly said, "You guys need to . . . you need to stop this. It's not an organic thing that's just happening. You guys are behind it."

The only thing that pops into my head is that Holder may yet be doing an MTV video of Napoleon XIV's Dr. Demento classic, "They're coming to take me away, ha, ha!"
Posted by Dutchman6 at 4:37 AM

THAT'S the way these things are done, young Fraggle!

Take heart all! because this is what we are up against.When their underhanded deeds are exposed to the light of day .They panic and scurry about like the cockroaches they are.And yeah he does look like shit these days.How the mighty are fallen when their shit turns to Jello.

"I did not have sexual relations with that Pooch!"

"As I point my finger at you, three are pointed right back at me, but never mind that."

As someday it may happen that a victim must be found,
I've got a little list,
And you just made that list

You have a speck in your eye!