"We rationalized every new outrage." 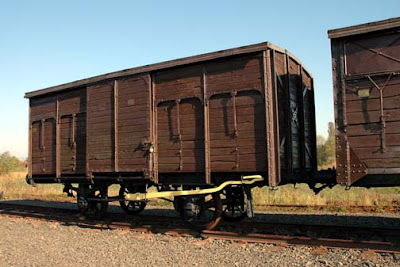 Original boxcar that brought Jews to Auschwitz in 1942

My post on the Bielski brothers' fight produced this reminiscence from my long-time friend John Russell, who hails from West Texas and is now is the senior national correspondent for IRN/USA Radio News. Though based in Memphis, says John, "We provide top and bottom of the hour news and other programming for over 2600 radio stations throughout the United States both secular and religious."

I may have told this story before, if so please indulge me. When I was in my 20's my mother introduced me to a retired professor of mathematics who had survived Auschwitz. We became friends and would meet every so often at a deli and drink coffee (no milk) and sort out the world's problems.

I made a point of not bringing up the horrors he experienced in the camps. One afternoon my friend began to relate his story with the narrative ending with his coming to the United States.

It was at this point that I asked the question that had bothered me from the time my father had first told me about the Nazi's treatment of the Jews.

"Professor, the Krauts would have to shoot me on the train platform before they could stuff me and my family into a cattle car. Just what hell were you people thinking? Couldn't you see what had to be obvious, that these people were monsters? My G-d if just one of you disarmed a guard and put a round through his head, even if you didn't escape, at least you could die upright on your terms instead of theirs."

This was his answer.

"We could not bring ourselves to believe the reality of what we were seeing. We rationalized every new outrage. We told ourselves that Germany, even under the Nazis, was an advanced nation and that the madness was temporary. Besides every where we looked there were, still visible, the landmarks of civilization, church spires and the university towers. As far as offering armed resistance, who knew guns? Sure there were Jews who once served Germany as soldiers. Some were given medals for bravery. Hell the officer who got that rat Hitler his Iron Cross was Jewish. Most of us however were not fighters, besides when the Nurnberg laws came down we acted like all good Germans and turned in our guns. Its not like we had a choice. The police knew who had guns and we Jews didn't want to antagonize the Nazis."

He went on, this time a little more reflective. "Maybe, because of our segregation from most of the culture and our relatively small numbers us we always believed that no one could be left behind or not have his voice heard. Perhaps we were too willing to hear and take the counsel of the fearful. Any way that was the way it was."

"One last question, do you know how to shoot now?"

"What about your son?" He grinned widely "The Marines taught him. They like that their officers should know how to use a rifle. He also knows how to use a tank, he's a good boy."

I left that city not long after and lost track of my friend. And now I see the beginnings of that old disease of hatred directed at the chosen of G-d. You can see it on college campuses and in the establishment media. But I know this, at least some of Abraham's long suffering progeny will not go quietly into boxcars. No, not this time.
Posted by Dutchman6 at 4:27 PM

Do you think it can't happen here?Think again.

The President Elect has stated the need for a 'Civilian Security Force', after calling for federal laws overriding state concealed carry laws.

A minor historical footnote:
using boxcars for transport of
humans, and civilians at that
was not without precedent. Many
were evacuated IIRC in the first
World War in freight cars.

That's from memory; George Clare
quotes that (in English translation) in his book Last
Waltz in Vienna wherein he
relates his early years there,
leaving in 1938 at age 17 and
his parents' fate after seeking
refuge in France.