"Brothers in Arms": My Nomination for Gun Store Owner of the Year 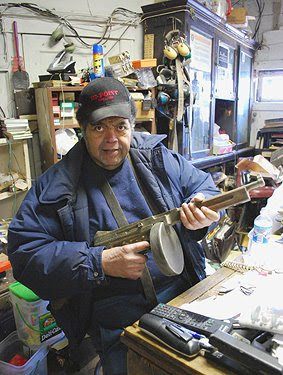 ‘Your honor, when you’re dead and in your grave, when you feel that water coming in, it will not be rain. That will be me pissing on you.’

Read this and tell me I'm wrong. Of course you're welcome to make your own nominations, but I'm sticking with General Laney. Here's some excerpts:

“Does anybody here have a problem with taking a life?” asks 69-year-old General Laney, owner of Laney’s Guns and Supplies on Detroit’s east side. “If you’re not capable of taking a life then you’re not in the right place,” he warns, “’cause you might have to take a life. You have no choice because the person who wants to take your life has no feeling for you.”

Laney should know — he was once shot six times.

Aside from an old house, his store’s the lone building on the block. It’s along a terrible stretch of Chene that was once part of Poletown but now is part of an urban prairie. In a town full of guns, Laney’s is the only place left where you can buy them legally within city limits.

Laney’s sells firearms and ammunition, hosts the aforementioned classes, and has a shooting range in the basement for which you can rent guns. From the 1920s until he bought it, the building housed a billiards room — it was a place to shoot pool and shoot guns. . .


His core belief is that gun laws target blacks. “Gun control in Detroit is racist to begin with. You heard of Dr. Sweet?” he asks, referring to the case of Ossian Sweet, a black physician who, with his family, was tried and eventually acquitted for shooting into a mob that attacked their home when they moved into an all-white neighborhood in 1925.

Soon after, the state passed stringent gun-control laws, known as Public Act 372 of 1927. Laney sees those laws aimed squarely at blacks, a reaction to the verdict. “After the Sweet case, the Michigan Legislature said we couldn’t allow black people to have guns, and that’s how Michigan gun laws come about.”

“Gun control is race control,” he adds. “It has been that way to keep blacks in servitude.” Another hero of his is Robert F. Williams, a 1960s advocate of armed self-defense for the black community and an inspiration to the Black Panthers. . .


Laney has become nationally notorious in the gun industry for his views, eventually drawing the law’s attention. In 1999, six years after he bought the place, the Wayne County Sheriff’s Office sent an undercover cop into the store to make a “straw” purchase, in which a qualified buyer purchases a weapon on behalf of someone who can’t legally buy it — in this case it was another cop posing as a minor. The sting resulted in charges against Laney and two other gun shops. Laney fought the well-documented case all the way to the Michigan Supreme Court and was exonerated. He says he spent $50,000 on legal bills defending himself.

“They tried to set me up,” he claims. “It’s a moral victory.” A gun group gave him a trophy consisting of two brass balls to commemorate his tenacity. “It’s a thing that should never have come to court anyway. When court was over I said, ‘Your honor, when you’re dead and in your grave, when you feel that water coming in, it will not be rain. That will be me pissing on you.’”
Posted by Dutchman6 at 6:59 AM

I'd like to also recomend Mr. Jay Wallace,of Adventure Outdoors in Georgia.

He is the last man still fighting Bloomberg in the "strawman" purchases Bloomberg and Company used to shut down Gun Stores across the land.

Damn to Hell Bloomberg and ALL gungrabbers who wish to disarm us.

Wow, this is really good.