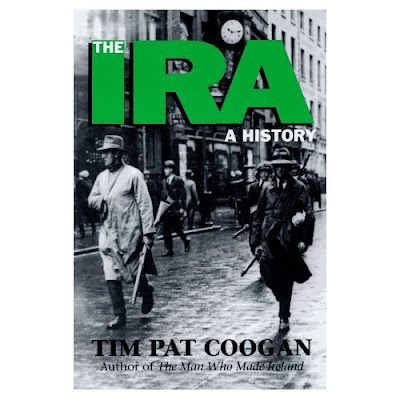 There is a tendency amongst practicioners of the armed citizenry to slavishly copy the gear requirements adopted by the US Army and Marines. This tendency finds its way into "gear lists" of "required equipment" that strain the budget, and worse, the backs of citizen soldiers.

One of my favorite photos of the Irish Civil War is found on the cover of the trade paperback edition of Tim Pat Coogan's classic, The IRA: A History. It shows anti-Treaty Volunteers of de Valera's faction patrolling a Dublin street. Their uniform is trench coats and fedoras and they are each armed simply with an SMLE in .303 and a bandoleer of ammunition in stripper clips. Likely, some of them have pistols concealed under their coats. But that is it. They are ready to fight, or if outnumbered and put under pressure, to easily dump arms and blend into the crowd.

"The speed with which tactical forces forget the main lessons from their collected experience, particularly those pertaining to weapons usage, would be difficult to overstate." -- S.L.A. Marshall, Commentary on Infantry Operations and Weapons Usage in Korea, Winter of 1950-51, p. 15

The overloading of the American infantryman is by no means merely a modern sin. S.L.A. Marshall was the first to lay out the problem in bookform in
The Soldier's Load and the Mobility of a Nation available from the Marine Corps Association Bookstore for $9.95.

Recently, the fighting in Iraq and Afghanistan have once again demonstrated the folly of overloading the man at the point of contact.

See this article and this report.

No doubt about it, the Corps’ full combat load is making sure grunts live up to the name. But relief is in sight for Marines tired of humping the heft of full “battle rattle,” as the Corps looks to refine its stance on how much body armor and gear must be worn into combat.

According to a Naval Research Advisory Committee report, the average Marine carries 97 to 135 pounds in combat loads — far above the recommended weight of 50 pounds. The bulk of the weight carried is protective equipment.

“Common sense tells you that if you put more weight on a Marine, obviously he’s going to be slowed down,” said Capt. Jose Vengoechea, project officer for the Lighten the Load initiative at the Marine Corps Warfighting Lab in Quantico, Va., in a phone interview. “We break the rules. No one should have to carry more than 30 percent of their weight in combat.”

Every pound counts, no matter what the job.

“You can believe if you have a guy who is 170 pounds and you put 80 pounds on him, he’s not going to last very long,” Vengoechea said.

“As a society, we’re into surviving the hit, not avoiding the hit,” Vengoechea said. If, for example, a Marine spotted an insurgent who shot at him, how fast could the Marine run wearing 130 pounds of gear and expect to catch him?

So, my fellow gunnies of the armed citizenry, look to your gear with a serious eye to lightening your load. How much more than a rifle, bandoleer and canteen do you really need? Can you dispense with a canteen in urban environments? And if your AO is in the countryside, how much MUST you carry and how much can be downloaded into dispersed caches?

Read the above sources.

Now, while you still have the luxury.

Thirty pounds, max. There are those who are trustworthy, but disinclined or unable to engage in combat. Have them handle the extra equipment. In the War for Independance, it was the old guys, and a fine service they rendered. Women not ready for war, for whatever reason, can come along and nurse, and cook and guard. Wars are not fought by warriors alone, and those who wait also serve. Without the efforts of millions of women, boys and the aged, we would not have beaten the Brittish, the Nazis or the Japanese Empire. Provision for the ones who help must always be made, and their help must never be overlooked. Having a hot meal and a place to sleep after a combat is nothing less than miraculous to a soldier, I know because I've done it. Some one guarding the cache, bringing up supplies, looking after wounds, standing a guard while you sleep, cooking a meal, invaluable. Then, rested,fed, and with your thirty pounds, out you go again. The support is what makes it happen. Not only does todays Army and such carry too much equipment, it is too tech reliant. Light, swift, and accurate, the way to go.

There are a number of decently useful books out there on the subject filed under ultralight backpacking. One tenet that I've tried to adopt is the six-pound core weight. Ideally, your ruck, sleeping system, and shelter system should weigh six pounds total. This leaves me with 43.5 pounds of other equipment that I can carry (165 lbs * 30% - 6 = 43.5 lbs). That can be quite an effective load if I distribute consumables well amongst various caches.