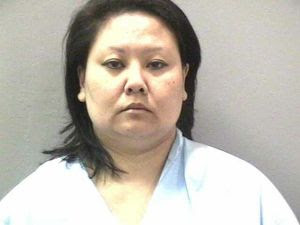 So the fortune teller didn't foretell her own murder. Okay, I get that. But you have to admire the brutal honesty of the prosecutor:

SANTA ANA – A Westminster fortune-teller and her daughter were brutally murdered by a client because the fortune-teller wasn't able to grant a wish, a prosecutor told jurors today.

Tanya Nelson – who is standing trial for the killings of Ha "Jade" Smith and her college-aged daughter, Anita Vo – was upset at losing her lover and blamed Smith, Senior Deputy District Attorney Sonia Balleste said.

"For some reason, this defendant believed in fortune-telling,'' Balleste said.

The fortune-teller wrote a letter to Nelson and apologized for not being able to change anything, Balleste said. That letter was found in Nelson's home.

Nelson, 45, of North Carolina was angered that the fortune-teller wasn't able to change reality, and decided to travel to Orange County to kill her, Balleste said.

Jurors listened to closing arguments today in the death penalty trial of Nelson – who is accused of persuading her accomplice Phillipe Zamora to take part in the murders by promising to fix him up with gay sex partners.

Nelson is charged with two counts of murder plus the special circumstances of committing multiple murders, murders for financial gain, and murders during the commission of robbery, burglary and by lying in wait.

If convicted, she could get the death penalty.

The bodies of Smith and 23-year-old Vo were found repeatedly stabbed and – for an unknown reason – covered with white paint inside their home on April 21, 2005.

Their home was also ransacked, with Nelson stealing credit cards, cell phones, jewelry and designer luggage, according to Balleste.

Nelson also took a pair of diamond earrings – worth $35,000 – off Smith's dead body, the prosecutor said. She also used Smith's luggage to travel.

"That is the nerve of this defendant,'' said the prosecutor, glancing over at Nelson. The defendant seemed composed, and took notes during closing statements.

Zamora, who pleaded guilty last year to two counts of first-degree murder with a potential sentence of 50 years to life in prison, was the prosecution's key witness against Nelson. He testified Feb. 1 that Nelson wanted Smith dead because she was angry about her fortune.

Nelson's defense attorney, Ken Reed, will give closing arguments at 9 a.m. Thursday. During his opening statements, the lawyer said Zamora acted alone in the killings, and testified against Nelson in hopes of getting parole one day.

Balleste dismissed Reed's defense, and told jurors that Zamora wasn't smart enough to mastermind the murders – or even find gay sex partners on his own.

I'm assuming that there is an outrage against unregistered stabbing instruments and calling for legislation to protect us from ourselves.

Well, looks like he got his wish...He is going to have many, many to please every day for the rest of his life, if the state doesn't execute him.

If Zamora gets a full 50-year jail sentence, he will have numerous opportunities to locate a homosexual partner amongst California's prison population. ;^)

Prison would be giving this POS what he WANTS.

Either execute him or give him life - in a women's prison.