"One of the statists' most feared bogeymen": I get some free publicity from the citizen disarmament crowd. 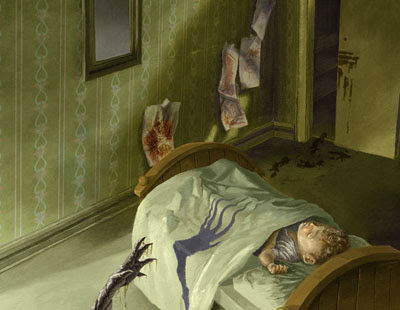 Bad dreams in gun control land. The Boogeyman Gonna Get Ya, If'n Ya Don' Watch Out.

Kurt Hoffman at Armed and Safe notes here that the El Guapo and El Jefe of citizen disarmament are out with a new book advocating a government monopoly of force and are using me to do it. Guns in the hands of the common people are just too dangerous to "democracy." Well, duh, the Founders certainly agreed with that, that's why they gave us the Second Amendment and a constitutional republic to go with it -- NOT a democracy.

(I love the first half of Kurt's first sentence, so I've posted it prominently here at Sipsey Street.)

Indeed, I'm so proud that I'm under the CSGV's skin, I could just defecate. Here's Kurt, but be sure and go to his site, and to his Examiner column, and follow all the links.

I believe that being despised by the despicable is as good as being admired by the admirable, and that being the case, Mike Vanderboegh is racking up the unintended endorsements. I've talked often in the past about the Coalition to Stop Gun Violence (CSGV), and their open advocacy of a monopoly on force.

That advocacy, indeed, is what I see as the most notable characteristic of that bunch. The other citizen disarmament groups clearly want the armed might of the government to be well beyond the people's ability to realistically challenge, but are a bit less eager to publicly acknowledge it. Not so with the CSGV--whose executive director, Josh Horwitz, is now promoting a book he wrote on that very subject--Guns, Democracy, and the Insurrectionist Idea.

And that brings me to today's topic--on the above page, advertising the book, is the category, "Insurrectionist Talk." There, Mike is featured not once, but twice, with links to both Monopoly (or, Slouching Toward ‘Nut Cuttin' Time.’), and "Kill All They Send..." -- both excellent reads (as I've come to expect from Mr. Vanderboegh). Too bad they seem to have missed And you thought this was a comedy? -- "El Guapo" & "El Jefe" Ride Again with Guns, Democracy and the "Insurrectionist Idea."

And we can't forget the Brady Campaign. Back in August, they had this (among other things) to say about him:

In the wake of the Vanderboegh letter, to one degree or another, armed revolt has been treated as a legitimate policy answer to popular gun control measures by one blogger after another in the gun community - rather than denounced as immoral or as street-corner gibberish uttered by one who wears a tinfoil hat.

Mike Vanderboegh is fast becoming one of the statists' most feared bogeymen. My admiration continues to grow.
Posted by Dutchman6 at 5:39 PM

Los gabrons del gun control forget that there have been liberty torch-bearers in every generation. The deeper the dark, the brighter any light appears to shine.
Are we Four-Percenters yet? I'd wager the answer is yes, or Five-.
Hundreds of thousands of people haven't been buying guns since November 2008 because they're suddenly SPORTSpeople.

III, or IV, or V, whichever's appropriate. Shortly we may run out of fingers for the salute.

Free publicity is great! It is like using their own weight against them. Another timely letter to the editor of every major newspaper in the nation right before "Absolved" is released? That would be a move worthy of Sun Tzu!

Congratulations, and wear it as a Badge of Honour!

"III, or IV, or V, whichever's appropriate. Shortly we may run out of fingers for the salute."

We only need one to salute the gun grabbers.

It just gets worse:
http://canadafreepress.com/index.php/article/10688

Defender: There will always be at least one with which can salute them.

BRAVO!! Keep up the rhetoric! Let the gun grabbers think it's an attack. They ain't seen nuttin' yet. And possibly, if they have even two brain cells to rub together, they may pause or halt their tactics in fear of the retaliation they know will be coming their way.

There's no room for the likes of you in the Democratic People's Republic of America (DPRA).

I always salute the JBT's with one particular finger.