Liberty Logistics: From the Communist Experience -- The Logistics of the Urban Guerrilla by Carlos Marighella 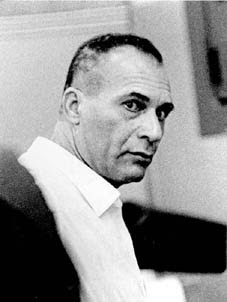 Carlos Marighella (5 December 1911 – 4 November 1969), was a Brazilian guerrilla revolutionary and Marxist writer. Marighella's most famous contribution to guerrilla literature was the Minimanual Of The Urban Guerrilla, consisting of advice on how to disrupt and overthrow authority with an aim to revolution. He also wrote For the Liberation of Brazil. The theories laid out in both books have greatly influenced modern ideological activism. Unlike Che Guevara who proposed guerrilla activity taking shape in the villages, Marighela's theories on urban guerrilla warfare envisaged cities as the spring of rebellion. -- Wikipedia.

In 1969, Carlos Marighella wrote the Mini-Manual for the Urban Guerrilla. Chapter 8 deals with logistics. The link is here. Shortly thereafter, he was killed in an ambush by Brazilian police. Whether that is a statement upon the tactics laid out in Minimanual, or a reflection of the fact that even your enemies can read books, I do not know. Even so, here is his chapter on guerrilla supply.

THE LOGISTICS OF THE URBAN GUERRILLA

Conventional logistics can be expressed with the formula FFEA:

Conventional logistics refer to the maintenance problems for an army or a regular armed force, transported in vehicles, with fixed bases and supply lines. Urban guerrillas, on the contrary, are not an army but small armed groups, intentionally fragmented. They have neither vehicles nor rear areas. Their supply lines are precarious and insufficient, and they have no fixed bases except in the rudimentary sense of a weapons factory within a house. While the goal of conventional logistics is to supply the war needs of the "gorillas" who are used to repress rural and urban rebellion, urban guerrilla logistics aim at sustaining operations and tactics which have nothing in common with conventional warfare and are directed against the government and foreign domination of the country.

For the urban guerrilla, who starts from nothing and who has no support at the beginning, logistics are expressed by the formula MMWAE, which is:

Revolutionary logistics takes mechanization as one of its bases. Nevertheless, mechanization is inseperable from the driver. The urban guerrilla driver is as important as the urban guerrilla machine gunner. Without either, the machines do not work, and the automobile, as well as the submachine gun becomes a dead thing. An experienced driver is not made in one day, and apprenticeship must begin early.

None of these operations is carried out for just one purpose. Even when the raid is to obtain money, the weapons that the guards carry must be taken as well.

Expropriation is the first step in organizing our logistics, which itself assumes an armed and permanently mobile character.

The second step is to reinforce and expand logistics, resorting to ambushes and traps in which the enemy is surprised and his weapons, ammunition, vehicles and other resources are captured.

Once he has weapons, ammunition and explosives, one of the most serious logistics problems facing the urban guerrilla is a hiding place in which to leave the material, and appropriate means of transporting it and assembling it where it is needed. This has to be accomplished even when the enemy is alerted and has the roads blocked.

The knowledge that the urban guerrilla possesses of the terrain, and the devices he uses or is capable of using, such as scouts specially prepared and recruited for this mission, are the basic elements in solving the eternal logistics problems faced by the guerrillas.
Posted by Dutchman6 at 10:31 AM

Excellent stuff! There seems to be a whole world of useful and practical information out there, not the pseudo-macho blood and guts fantasy stuff but real, down to earth applicable information ( for academic / study purposes only, of course).
Recently I encountered both "Total Resistance" by H. Von Dach, and the updated "US Special Forces Guerilla Warfare Manual" by Scott Wimberly ( both by Paladin, but available from Amazon, other online places for decent prices) and the old standby,
http://www.scribd.com/
which happens to have more books and government manuals on topics of interest to three per centers and available as free downloads.

Whatever awaits just around the bend, we have an advantage in being able to access info based on the experiences of generations past so that we may navigate with at least some degree of confidence.
And logs like this one are an invaluable resource!!