"All sorts of alarming possibilities." -- A cautionary snippet of history appropriate to the Obamanoids in the era of Gangster Government.

Back at work on Absolved and looking for a particular quote to buttress a point in the narrative, I found this in Barbarossa by Alan Clark. It strikes me that folks like Eric Holder ought to consider the rougher edges ahead for them in their proto-tyranny.

From a purely executive standpoint (Himmler) was the most powerful man in Germany, but at this stage in the war, and his country's decline, Treuer Heinrich was a man of troubled mind. The extension of his domain from the SS, where all was tidy and the staff was (or had until lately seemed to be) obedient and loyal, to the rough and tumble of military affairs was proving to be a mixed blessing. For Himmler was in a field where new elements, hitherto outside his experience, were making themselves felt. . . There was also the prospect, novel and unwelcome, that he might be engaged with enemies who would actually be ABLE TO SHOOT BACK -- a development which opened all sorts of alarming possibilities. 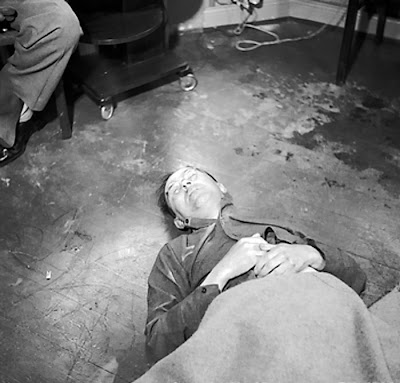 "You're no daisy! You're no daisy at all. Poor soul, you were just too high strung." -- Doc Holliday to a dead Johnny Ringo in Tombstone. Himmler post cyanide.
Posted by Dutchman6 at 9:27 AM

If not already done, the fast maneuver concepts of John Boyd should be internalized by three percenters. Boyd was ahead of his time in the 1980s when he developed the OODA Loop, used in Gulf War 1.

"Boyd's proudest achievement was a theory called OODA, for Observe-Orient-Decide-Act. Developed largely from his study of the ancient Chinese theoretician Sun Tzu and Prussian military reformers of the 19th century, the theory explains how a combatant can defeat the enemy on the mental battlefield, before the real shooting starts."

All of Boyd's works with additional commentary and updates.

Any decision involves unknowns, no matter how much information that a decision-maker has. Sometimes, having too much information can even cause paralysis or bad choices. The lack of complete information means that there will be certain consequences of that decision that are unanticipated or unintended. Just ask John Ross.

Such is the situation with anyone (or any group) that would attempt to turn the country into a super nanny state (i.e. dictatorship) with no guns in the hands of anyone but the police, para-military and military. Fact is, there are 85 million variables, at least, in that equation. NO ONE knows - OR CAN POSSIBLY KNOW - what the effect of going down that path would be. I could be as simple as one person on either side taking a very lucky or very unlucky shot - viola, unintended consequences.

MV and the rest of us like to speak of 3%. OK, let's not be so optimistic, let's assume 1%. The 1% with the best equipment, the best training, the strongest motivation and morale. That's 850,000 souls, acting for a single goal (even if not in a coordinated manner). Remember what the "Beltway Sniper" did back in 2002? One guy, rather mental, average equipment, average training, one uneducated helper, also perhaps a bit mental. Oh, and they left brass all over the place. It took THOUSANDS of police using dozens of choppers, thousands of vehicles and, rumor had it, a satellite, to find these two miscreants...and they didn't find them, Joe Average truckdriver did.

Think about what 850,000 people could do. Think what 8,500 people could do. I'd bet on much reduced deliveries of food and fuel from the interior to the coastal cities, as truck drivers won't want to travel hazardous roads. How long until food riots start? How long until your coastal refrigerator or car stop working because of actual or perceived shortages (want to see such a mentality in action...look at what has happened to guns, ammo and reloading components. Now imagine that the shortage is in a vital commodity, like food).

For the benefit of the lettered agency folks who must read this blog, I am not planning on any such activities, nor am I conspiring with anyone to commit such, nor am I advocating that anyone do them. I am merely speculating, thinking aloud about scenarios, trying to stimulate thought (like MV, among the other things he is trying to do) - and such is still allowed pursuant to the 1st amendment.