"I want to be on your domestic terrorist watch list!" 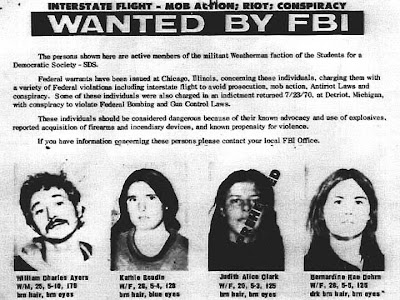 These were domestic terrorists. They are now FOBs (Friends of Barack).

In a post entitled I, Homegrown Terrorist, here, David Codrea draws our attention to a document out of Missouri which claims to be a "strategic report" of "The Modern Militia Movement." David has volunteered to be on their roll of honor. Me too:


If this report (http://www.infowars.com/secret-state-police-report-ron-paul-bob-barr-chuck-baldwin-libertarians-are-terrorists/) is true, please add me to your domestic watch list.

1. I have been one leader of the Alabama unorganized militia since 1993.

2. I maintain a website, sipseystreetirregulars.blogspot.com, which is dubbed as a "gathering place for a merry band of Three Percenters." I am an "alleged leader" of that "merry band."

3. Including my name on your McCarthyite list can only increase its accuracy percentage, since most of what you have written is unadulterated horseshit.

4. If you look down, you will notice that your shoes are covered in illogical paint spatters from your uninformed broad brush, dislodged and sent flying by your apparent brain fart. Lumping racist terrorists in with constitutional militia folks who fought them tooth and nail throughout the Nineties is either disingenuous or a damnable lie. Google my name, Mike Vanderboegh, then add Michael Brescia (I and my fellow militiamen embarrassed the FBI into arresting that member of the Aryan Republican bank robbery gang when the Feds were giving him a pass to walk around Philadelphia packing a weapon AFTER he had been mentioned in federal court as a gang member who had carried a bomb into one the banks they robbed. See The Secret Life of Bill Clinton by Ambrose Evans-Pritchard and In Bad Company by Prof. Mark Hamm.) Google my name and Martin Lindstedt, the neoNazi Internet troll and convicted child molester. Google my name and Kirk Lyons, the federal snitch and attorney for neoNazis, terrorists and government provocateurs like Andreas Carl Strassmeir.

I have been fighting neoNazis, "Mistaken" Identities and Ku Kluxers all my life, you moron, and I resent your tossing me into their cesspool with your lies and sloppy scholarship. (See upcoming book by Prof. Robert Churchill, Shake Their Guns in the Tyrant's Face, University of Michigan Press.) With enough research you will discover that the neoNazi terrorists have more in common with their FBI handlers than they do with the constitutional militia people that I have been privileged to know for many years.

5. Militia members assisted state and local law enforcement throughout the Nineties and the early years of this century. I can refer you to some law enforcement officers who can attest to that, if you are actually interested in the truth.

A final observation. I assume someone is paying you tax dollars to push this excrement wrapped up as "intelligence." They are not only NOT getting their money's worth, they are buying "information" that can only lead to law enforcement errors based on lies and/or sloppy scholarship. You, sir, are going to get people killed by lying about what you evidently know NOTHING about.

So please, by all means, put me on your list. As a representative leader of militia for the past sixteen years, I deserve to be there.

Where you deserve to be is a matter of opinion.

I 'spect the Brits had a list like that back in the early days of engagement with our forefathers. And sure, they can add my name under yours ( like they don't already have our names on plenty of lists, right? ) and it would be an honor. BUT - as someone pointed out here a while back... those who compile lists need to bear in mind that other people compile lists of their own, too. Double edged swords cut both ways.

I guess this means I'll be needing to remove those "Bob Barr" and "LP" stickers from my vehicles.

This is the most hateful & extreme political platform on the planet...

Getting pretty close to the time to compare lists, wouldn't you say?

Mike, I'm pretty sure you didn't have to ask to be added to that list...

"They" should know. WE THE PEOPLE have a list of domestic terrorist too! Especially those of us who were REQUIRED to take an oath (some of us numerous times) to "uphold and defend the Constitution of the U.S. from ALL enemies foreign and DOMESTIC."

I suggest all elected "authorities" think hard and long about the Oath of Office they took. Have you been faithful to it. If not, consider yourself on WE THE PEOPLE's list.

Me thinks we should declare The SPLC a terrorist org. Morris Dees should be drawn a quartered