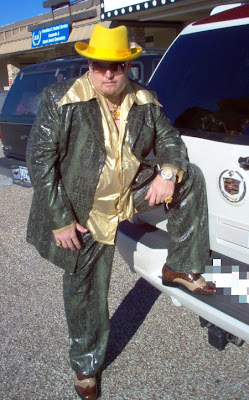 Over at s-NO-ball's place here. NRA knight in shining armor Sebastian has followed Morris Dees' pattern by eliding the differences between the Pittsburgh neoNazi copkiller and Three Percenters.

His allegation and my response posted on his website:

Snowflake sez: "He apparently also had a failed Internet Podcast. If you wonder why I’m so against the use of explicit threat of violence in defense of gun rights, this is the reason why. You don’t know what nutball out there’s going to take it seriously, and not get the subtle nuances of 'Fort Sumpters' and whatnot. I’m not saying this is anyone’s fault, and free speech is free specch, but there’s a danger in fanning the flames of some people’s paranoid delusions."

BTW, it's Sumter not Sumpter. He was a frigging NAZI, Snowball. He frequented Stormfront and believed in white supremacy and anti-semitism. And like the Southern Preposterous Lie Center, you DARE to deliberately elide the differences between such a piece of filth and us because it suits your agenda?

Typical. What makes you any different from Morris Dees? Hint: he gets paid money to do it and you do it for free.

Later PS: Somebody slap an NRA sticker on that pimpmobile.
Posted by Dutchman6 at 5:05 PM

I hope Sebastian reads the comments here too, because I want to add my 2 cents along with your post.

First of all, that copkiller was the typical neo Nazi terrorist. He was the fan of a website that openly claimed hatred against other races and ethnic groups, and supported terroristic actions such as "cleansing" and "purifying" the country. Country? What country? America doesn't belong to racist terrorists.

And secondly, this guy had a pretty disturbing history. From stalking, to threatening, to obsessively harrassing his girlfriend. And to top it all off, read the "broad" message that he posted on his Myspace. That is demented shit right there. So evidently, this crook obviously isn't a "patriot" or "libertarian", because what he had done was not just commit senseless murder, but also GAVE AMERICA'S PATRIOTS AND GUN OWNERS A VERY BAD NAME. Just like Timothy McVeigh gave the militias a very bad name. In fact, this recent perp's actions probably gave even more ammo to the gun banners who are drooling for a chance to go Ingsoc on this country's culture.

So in conclusion, this nutjob isn't one of America's defenders. In fact, what the media reports about his fears of a "gun ban" was just pure BULL EXCREMENT, because that is an obvious media attempt to paint all of America's gun owners with a brush dipped in shit. Note how they write "HIS FRIENDS claimed that he was afraid of a gun ban". Yeah. Keep spinning the story all you want. Nice try, but I am not fooled at all.

Where DID you find that photo, and who is it??? My first thought would be a member of Homeland Security, trying to dress incognito. Second guess would be Pelosi's gigolo. Final guess would be Obongo's speechwriter.
Hope the trip went OK, btw. Welcome home.
- j -

The whole "no Fort Sumter" thing is naieve. There WILL BE a FOrt Sumter. If one does not happen spontaneously one will be provided. the thing is, the train of abuses is long and well documented. OTOH, it only matters if we lose, and if that is the case, well history IS written by the victors.