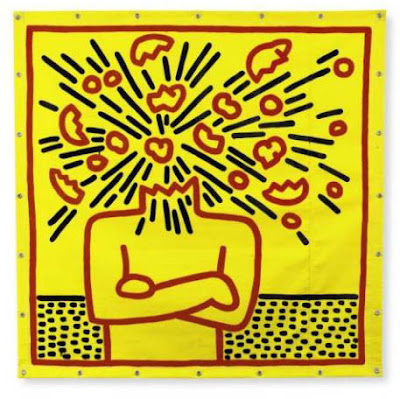 WARNING! THIS POST DEALS WITH THE DANGERS OF COLLECTIVIST CONFLATION AND CONTAINS GRAPHIC IMAGES OF SYSTEMIC RESPONSE TO MASSIVE LOGIC FAILURE! 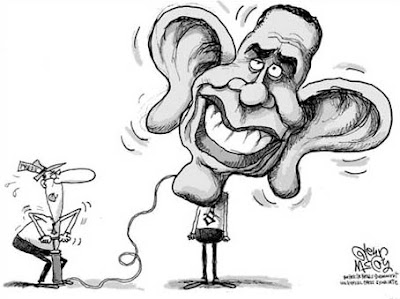 Yesterday, I wrote of the public health menace of collectivist conflation as practiced by the Southern Poverty Law Center. Today, we have the latest example of conflation in action, by a sneaky little commie rat bastard at a tea party. You can find it at the wildly misnamed blog Common Dreams here. 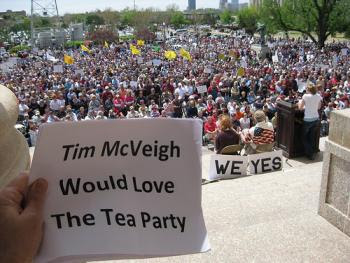 Note that the little coward only showed the sign to his cell phone camera for an instant while everybody on the dais had their back turned. How'd he get that perch? News reporter perhaps? One thing is certain, if he continues to conflate at this rate, he will soon find that the internal logical pressure on his brain will build until this happens: 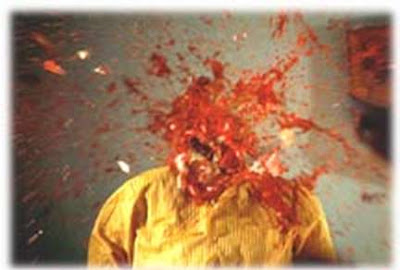 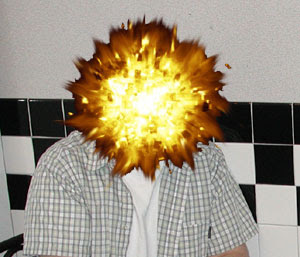 In fact, the Center for Disease Control in Atlanta today issued a confidential public health advisory to the Secret Service to be on the look-out for this woman: 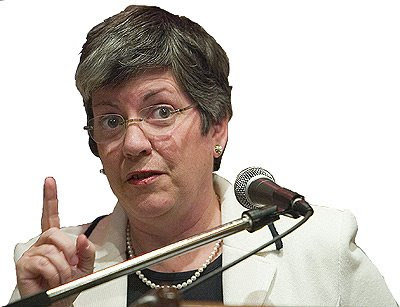 The CDC explained that since Napolitano's embracing of her department's report on "Right Wing Extremists," her conflation index has risen to the point where her exploding head might pose a danger to President Obama were she allowed to be in the same room. Future contact between the President and his DHS director will be by phone, according to the President's doctors. Said one on the condition of anonymity: "We want to err on the side of caution. You know the President has a moderate case of this disease himself and we don't want to aggravate it. It does seem to be communicable and Napolitano may have a more virulent strain."

According to a Journal of the American Medical Association article in 1995, "Patient Zero" in the Conflation Pandemic was identified as Morris Dees, of Montgomery, Alabama.

Rumor down in Montgomery County has it that ole Morris' head ain't exploded yet because he never had a real brain to begin with. Just a theory. But the good old boys down there have coined a new word for running your mouth and conflating at the same time: conflatus.
Posted by Dutchman6 at 2:01 PM

The picture in the middle:

What a punk ass COWARD!! ROFLMAO!

Look, he even has to wait until EVERYBODY'S backs are turned in order to display a puny, pitiful little, lie-infested sign even tinier than his already shrunken manhood. And even then, he won't show anybody else his "sign", except his cameraman standing right behind him. That is the FUNNIEST picture I have seen in a while!

That little coward reminds me of a certain little punk from 8th grade who, every single day in class, would boast about how he can wrestle all of us, choke-slam two guys three times his size at once, and even go on Wrestlemania "and defeat both the Undertaker and the Big Show in one match". To top it all off, he harrassed everybody else in class, threatening to "beat us up after-school" amongst other crap.

Well, a couple of days later, a bunch of us ran into that little coward at the Bball court right across the street. That punk ass got PWNED so hard he was so scared to even come to class for the next two days. When he did come back he sat well away from all the other guys, always looked nervously at us, and would be out the door the minute the bell rang.

Needless to say, he stopped boasting and threatening people, I mean, COMPLETELY stopped. I don't think even psychotherapy would be able to change his personality that fast. You could imagine the whole thing was funny as hell.

opetiveJanet Reno, Janet Napolitano, OMG they look like they could be sisters. Where do these leftists get these ol bags from. We had a leftist at our party too and I was lucky enough to have him approach me. I pointed him out to the people in the immediate vicinity and he slithered off like a good little snake would after having his ass handed to him (verbally)

Conflatulance! The word for today.