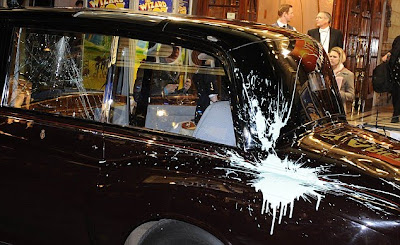 Protesters attack car containing Prince Charles. Although the student protesters broke at least one of the car's windows, the dangerous situation was immediately reversed when Camilla Parker Bowles, the Duchess of Cornwall, stepped on the back of the cowering Prince Charles, popped up out of the roof hatch and began to sing "Rule Britannia." 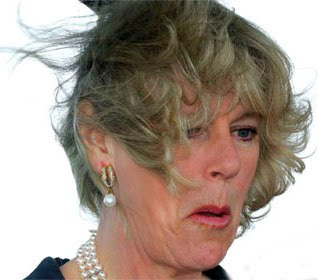 Some protesters were temporarily blinded by the Duchess' legendary ugliness and fell to the wayside screaming "My eyes! My eyes!" Others were deafened and disoriented by her screeching, while still others, with their senses overwhelmed, fell to their knees vomiting. 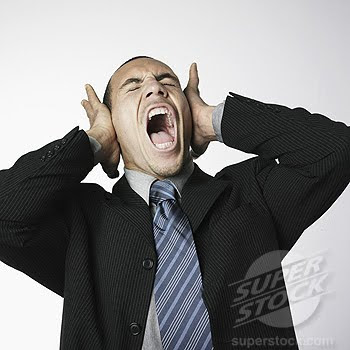 Speaking on condition of anonymity, a spokesman for the royal bodyguards admitted that the Duchess had been trained for just such an eventuality saying, "We thought we might as well turn a liability into an asset."

Roland Smegma, famous London solicitor, has indicated that the affected students will be filing a complaint with the European Human Rights Commission. "I cannot conceive of a worse weapon of war being deployed on the streets of London. I mean, if they wish to send the Duchess to Afghanistan and blind the Taliban, that's all well and good, but to deploy her Medusa weapon domestically against peaceful protesters is a crime."
Posted by Dutchman6 at 2:06 PM

This is coming here.

Not Hillary! Oh, God help us!

Now that's just horrible! You know transgendered people have the same rights as you and I. This is nothing but cyberbullying and you owe Prince Charles' er... well his er, well-his partner an apology.

Hideous as she may be - she is a picture of loveliness next to the first klingon.

No Mark M , she has been debarked, our equivilant is a duet of the village peoples YMCA sung by the janets , reno and the nappy headed troll in spandex

College-age Britons rioting over a law tripling college tuition. TRIPLING. The ultra-high socialist taxes the working Brits suffer under were supposed to provide "free" this and "free" that, and subsidized "the other." They're catching on.

Seriously, Justin 1:28, it is NOT coming here. Too many American sheeple are just too comfortable. This has been discussed at length in other posts about mob violence and police response. Remember the Columbia, MO "pot raid" about a year ago? They shot the guy's crated dog in front of his kids! Where were the protestors then? The fedgov burned up over 70 innocent women and children at Waco. The mass media said "good riddance to those religious kooks!" The other side of the same coin took over Congress in November to smooth things over for another two years until one of their empty suits can assume power and keep the funny money flowing and the sheeple happy with their NFL/NBA nonsense and other forms of bread and circuses. The beat goes on.

That is just too funny.

All the crowd was trying to do was present Prince William a wedding gift. That is, to make him next in line to the throne.

That said, it reminds me a lot of 1968 and the French student riots with Eric the Red, etc. I wonder how many of the "students" are actually university students as opposed to professional anarchists.

They rioting cause it's going up to $14k a year?
Shit, I pay more than that for a semester for one of my grandkids.

I have done close protection security work, leading them into that crowd was done intentionally. Problem, Reaction, Solution. Plain and simple.

Damn glad we kicked out the royal family in 1776. Prince Charles is an utter fucking moron.