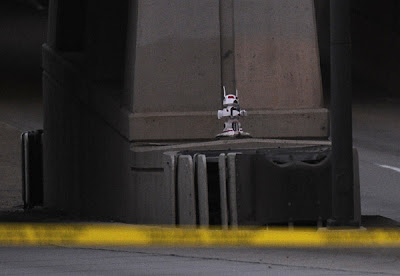 A robot met its end near Coors Field tonight when the Denver Police Department Bomb Squad detonated the "suspicious object," bringing to an end the hours-long standoff between police and the approximately eight-inch tall figurine.

I mean, don't they teach THIS in Colorado cop school?

(LATER NOTE: Since I was on the road yesterday, I didn't realize that David Codrea had already covered this. His comment reflects exactly the tactical lesson from this idiocy: "Seriously, this is all it takes?" Jot that down in your urban warfare lessons notebooks, boys and girls.)
Posted by Dutchman6 at 9:12 AM

Watching us suffer through "freedom fondles" from the TSA was getting boring for the terrorists.
Ireally think some college student glued it there, called it "art," and got an A for the semester.

The ATF has with immediate effect classified all 8" toy robots as destructive devices.

Every toy store selling 8" toy robots needs to register with the ATF as a dealer in destructive devices.

All 8" toy robots sales MUST be approved and registered, requires a $200 ATF stamp and have a 5-day waiting period before it can be taken home.

Owners of toy robots who do not pass the security clearance MUST forthwith surrender all their 8" toy robots to their nearest Police departement for destruction.

All local police departments are also authorized to hold 8" toy robot buy-backs in the parking lots of their local Walmart.

Federal tax $$$ (millions of it!!) will be allocated to exchange unlicensed 8" toy robots for a $25 Walmart gift card. No questions asked during the amnesty period.
After expiration of the amnesty period, the local SWAT team, ATF bomb disposal and FBI teams will conduct house-to-house no-knock warrant searches, for any unregistered, unlicensed 8" toy robots. Prosecution to the fullest extent of the law will be taken against all non-compliant subjects.

The Day The Earth Stood Still was my favorite childhood movie... and then I grew up and saw that it was a phony envirowhacko collectivist whine fest.

The scene where all the tanks melted was pretty cool, however. Never did care much for the robot otherwise.

MamaLiberty,
Which version of "The Day the Earth Stood Still" are you referring to? The original 1950's is a classic. Anti-war slanted, but still, a classic.
The new one with Keanu Reeves is, as you pointed out, an EnviroNazi propaganda piece.

ANd don't even GET me started on the "Starship Troopers"movie. . . . .

You have 20 seconds to comply.

Biggest gang in America can't take a chance it isn't glitching.
The brave only ones.

Let me see if I've got this straight:

An eight-inch high plastic robot was glued to the base of a column supporting a pedestrian walkway. The cops came out to investigate a citizen report and brought along their bomb squad. The suspected "bomb" was investigated with the bomb squad's superwhamodyne Bomb Wrestling Robot. The plastic toy was then detonated by the bomb squad just to be safe.

1. Even if the toy was packed full of Semtex or C4, would it have been enough to have even made a dent in the support column?

2. What if it HAD been a bomb? Would the cop detonator coupled with the robot bomb been enough to shear off the column?

3. Why didn't they just bring in a bomb sniffing dog?

4. Who else here suspects that the cops knew it wasn't a threat, but just wanted to play with their new Homeland Security toys?

5. Did the cops remember to notify the guys in the bar that the area was safe, and they could now drive home after drinking for over an hour?

"Who else here suspects that the cops knew it wasn't a threat, but just wanted to play with their new Homeland Security toys?"

I think we have a winner, 'cause that sounds like something I would do simply for a chuckle.

A couple of years ago, a man went into Cody (Wyoming) airport with a couple of kid's battery-powered blinky toys for his niece and nephew. TSA shut down the whole airport, and the highway in front of the airport, and called in every law enforcement agency in the area. They had a bomb squad flown in from Cheyenne, maybe 400 miles away. Eventually they decided the toys were not a bomb. "But at least the peepul were safe." Sheesh! I wrote a letter to the editor laughing at these idiots, and commenting that not all of us out here are scared of our own shadows. At least some folks got a laugh over it...