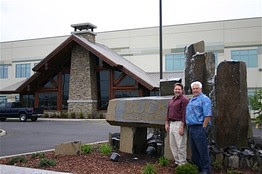 My thanks to Typeay for forwarding me this link from the Wall Street Journal. There will be much more of this going on as states and municipalities raise taxes in expectation that the productive people of their jurisdictions will pay for the privelege of bailing out their mistakes and largesse. Of course predations by the federal government cannot be dealt with by either of these means. There are, of course, other ways of remaining free.

In late 2004, C.J. Buck made one of his toughest calls as CEO of knife-maker Buck Knives. He decided to relocate the company from San Diego, Calif., where it had been headquartered for 62 years, to Post Falls, Idaho.

Big retail chains were pushing them to lower prices and reduce costs by outsourcing to Asia. Mr. Buck wanted to do as much manufacturing as possible on-site but worried his California headquarters put the firm at a cost disadvantage.

Your business went through some big changes before you decided to move. What happened that made you consider leaving California?

We [had gone] from having over 20,000 small cutlery dealers like Don's Hardware store and some chains to a few big accounts like KMart, Wal-Mart, JCPenney and Montgomery Ward. We saw tremendous volume increases because they could really move product. But price became a big factor and our margins began to get squeezed.

We were committed to controlling quality by manufacturing our knives on-site. [But] being in California put us at a 20% cost disadvantage. A lot of our competition were in far more business-friendly states.

Couldn't you just raise your prices?

These large accounts really capped our ability to raise prices.

What was the tipping point that led to the move?

Two things. Workers Comp rates in Southern California had gotten out of control. There was also a serious resource issue that was scary with rolling blackouts and water rationing that all led to uncontrollable utility bills. We had to make a major change.

We considered becoming a marketing-only company and outsourcing all production, or having assembly done in Mexico. The third option was a combination of adopting lean manufacturing, the Toyota production system, and moving out of California. We chose number three, which was the one most conducive to the brand.

Did San Diego or California offer you any incentives to stay?

The state did not. San Diego tried its best, but a municipality just does not have the resources to compete with a state.

What were you looking for in a new location?

We didn't want to have our corporate headquarters in one place and operations somewhere else. Wherever we moved, [our] family had to enjoy living in the new place. So lifestyle was a key factor. We looked at places that had a business-friendly legislative climate and looked like a nice place to live.

We initially looked at Tennessee and the Pacific Northwest. My grandfather had roots in Washington state, but things seemed too similar there to California. We ended up choosing Idaho because the legislative climate is so pro-business that we knew we'd still be in a good position ten years down the line. They also offered us a substantial training grant.

How did you prepare for the move?

We had about 240 employees when we left, and we took about 60 with us. We wanted to take our brain trust of employees so we could get up and running in 90 days. Each of the managers was tasked with choosing the right team for the job. We also premade 90 days worth of inventory and moved in our slowest period, which was January.

Did moving put a strain on the company?

Hugely. And this is where I beat myself up. It ended up being a bigger cash drain than I anticipated. Part of the reason is that it took a while to sell our old building. We did eventually sell it, but we took a bath.

How long did it take to reestablish the company?

It took us three years to really stabilize. We had problems hiring and keeping employees in the beginning. There are easier ways to make a living than knife-making and the unemployment rate dropped, so we had to raise wages. I had inherited the original employees we had from my father and rebuilding a new team in Idaho made me appreciate what goes into the process.

Overall, how has moving worked out for you?

We've been seeing a nice uptick in the last few quarters, though we project a compression in sales overall. We feel we're well positioned when the economy turns around. Moving allowed us to refocus the brand to get back to our roots.

Until they outlaw cutlery...