As my son would say, "Only an ex-jarhead. . . " My thanks to Typeay for this example of American grit, determination and courage in face of plain common sense. 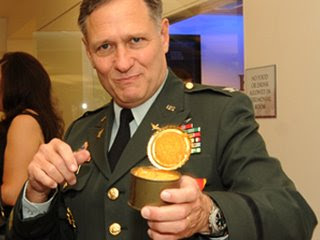 The Army colonel popped open an old military 'C' Ration can of pound cake from 1969 at his retirement ceremony, and dug in.

Moak got the drab olive can as a Marine helicopter pilot off the Vietnamese coast in 1973. He vowed to hang on to it until the day he retired, storing it in a box with other mementos.

After a formal retirement ceremony, dozens of friends and relatives joined Moak in the Pentagon's Hall of Heroes as he opened the can to cheers. Moak joked earlier this week that he hoped the can wouldn't explode. It let off a whooshing sound as the pressure seal broke.

"It smells good," Moak said as he put a handful in his mouth. He jokingly staggered back a few feet and loudly cleared his throat, while one person yelled out, "Eeww, gross!"

"It's even a little moist," he said, wiping his mouth. He dared anybody "gutsy" enough to join him, and retired Lt. Gen. Paul T. Mikolashek, who was the U.S. Army Europe commander when Moak served overseas, took an even bigger piece.

"Tastes just like it always did," Mikolashek mumbled with a mouthful of cake as Moak laughed and clapped.

Moak said he wasn't worried about getting sick from any bacteria that may have gotten into the old can, because it looked sealed. But the military discourages eating from old rations.

"Given the risks ... we do everything possible to ensure that overly aged rations are not consumed," said Lawrence Levine, a spokesman for the Defense Supply Center in Philadelphia.

Levine named the threats as mold and deadly botulism if the sealing on the food has been broken, which isn't always visible.

Moat says though he warned his children over the years not to touch his pound cake, he did let them eat some other rations when they were growing up in the 1980s, including canned spaghetti and crackers.

And how did those taste? "Fine. Well ... not like from our great restaurants."
Posted by Dutchman6 at 8:44 PM

The pound cake was the best desert in the MCIs. I used to save mine for special occasions.

Never ate one that was 40 years old, but I believe we did eat 10-15 year old stuff regularly. It was fine.

WOw that brings back some memories all right. I love'd how simple C rations were. I still have my original can opener

heh - I remember the pound cake too. Takes me back, oh almost 40 years. Funny how I can still taste it now.

C-Rats, like the Roach Motel. They check in, but they never check out.

Hell, the ones we were ISSUED were 40 years old :p

No biggie to eat the C-rats, as Crusty said, they were still issuing them in the 80's! I remember the pound cake, and the green eggs and ham... And the damn Hershey bar you couldn't melt with a @!#&* blowtorch!

Anyone else just have the urge to reread The Four Fingers of Death from the Absolved Chapter Links?

When I first read the headline, I wondered if he opened it with a P38.

I still carry one, though I'm not sure it was my first.

As a commo person, they came in real handy for opening cans of oil for the generators.

The C rat canned spaghetti taught me that if push comes to shove, the canned food aisle in any store is all I really need if I got to eat.

Most of my "food storage" is of a similar form. Go to Aldi, or your preferred discount grocer, and find a decent entree. For me, it was spaghetti rings and meatballs. One can for one meal, then buy a can of vegetables for every two of entree. For breakfast, do oatmeal, plan for two packets a meal if you eat a lot like I do.

This can be done slowly, a meal or two each trip, until you have a few weeks tucked away. Make sure you eat them every once in a while, so they don't go bad. This may not be very portable storage, but it's easy to do, is inconspicuous(what's an extra can of peas at the checkout?), and can allow for more variety. Much cheaper than a crate of MREs. I think I'll need one of those eventually anyway, since college dorms aren't conducive to food storage.