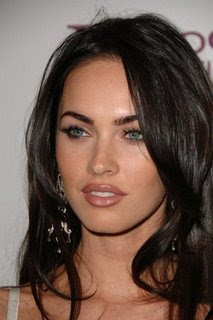 If only we didn’t have these white-trash Bible-beating hillbillies in middle America.

Meet Megan Fox, cultural envoy from the Collectivist Alternate Universe (pronounced "COW"). This cow is one of the vacuous cartoon cardboard cut-outs starring in the Transformers sequel, which apparently gives her status to pronounce on matters cultural and geo-political.

My thanks to GunRights4UsAll who pointed out this post from hotair.com.

The subject was Megatron, the evil Transformer who wishes to destroy Earth, apparently. (My son was too old for Transformers and my daughters were uninterested in moronic toy spin-off movies, so I have never understood the whole Transformers gig. Something about cars that turn into monstrous fighting robots. Or something.) 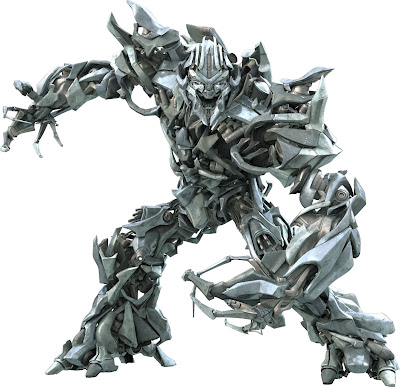 Can somebody explain to me why a robot needs a codpiece? Is that, like, where it keeps its CPU or something, thereby emulating all other Hollywood stars -- and certain politicians of both parties?)

So young CAU Megan Fox was asked by that serious foreign affairs journal of the Hollywood hive-collective, Total Film UK, what she would say to Megatron to keep him from destroying the world. Her reply?

“I’d barter with him, and say instead of the entire planet, can you just take out all of the white trash, hillbilly, anti-gay, super bible-beating people in Middle America?”

Coming from a girl supposedly raised in Tennessee, that seems a bit odd, but perhaps her brain cells have been poisoned by an overdose of tattoo ink.

In any event, it is somehow reassuring to note that the whole "Peace-in-our-time"-appeasement groveling-before-tyranny theme is still extant in the Collectivist Alternate Universe that claims to be the United States of America. 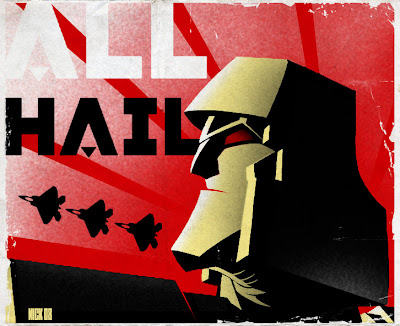 Of course, this begs the question that we must confront:

The next time a Megatron-with-a-human-face comes around, why don't we, "the white trash, hillbilly, anti-gay, super bible-beating people in Middle America" who have the means and the will to resist just let the robot Leviathan government eat HER?

It would be, I admit, a serious waste of pulchritude, but then we could always hope her ingestion into the Borg would give it a brain fart.

My favorite of all of Shakespeare's works, Hamlet, has a line by the young Prince -
"It may be the devil, for the devil hath power to assume a pleasing shape!". Or as my deeply missed great-uncle Walter was fond of saying "Gilding a turd doesn't change what's inside." I have noticed indeed that often the most beautiful people of either sex come out with the most vile, anti-American, anti-God, anti-Christian, anti-Jew venom available to be heard. And as long as they say it with twinkling eye and winsome lips, then the rest of the hypnotized world will look on with dreaming eyes and a good natured chuckle.

Credit where credit is due: I'm pretty sure I saw this on The War on Guns. But I appreciate the link nonetheless Mr. V.

Besides she is a pretty trashy woman herself...check her interview for FHM!

There is a more than insignificant portion on the Right and in the freedom movement who would echo her wish to see the "Bible thumpers" disappear... but then, we were told that's how it would be.

Frankly, she's such an eye-pleasing candy that I'd use & abuse her the same way the Left uses & abuses the Right:
As a one-night roll in the hay, and then goodbye!

I see you don't like the freedom of speech!