Praxis: The Tactics of Mistake

Tactical Deception Group: A task organization that conducts deception operations against the enemy, including electronic, communication, visual, and other methods designed to misinform and confuse the enemy. -- Dictionary of Military and Associated Terms. US Department of Defense 2005. 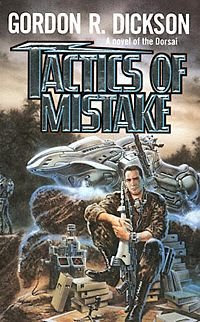 Trouble rather the tiger in his lair than the sage amongst his books. For to you the Kingdoms and their armies are things mighty and enduring, but to him they are but toys of the moment, to be overturned by the flicking of a finger . . . Lessons: Anonymous (From the opening of The Tactics of Mistake by Gordon Dickson.)

I have always liked Gordon Dickson's Dorsai series, but of all the passages from all the books, I most savor two from The Tactics of Mistake. The one above, and this:

"Do you know anything about fencing?"

"Then maybe you'll recognize the tactic in fencing I use as an example for some I call the tactics of mistake. It's in the volume I'm writing now." Cletus turned to him. "The fencing tactic is to launch a series of attacks, each inviting ripostes, so that there's a pattern of enages and disengages of your blade with your opponent's. You purpose, however, isn't to strike home with any of these preliminary attacks, but to carry your opponent's blade a little more out of line with each disengage so gradually he doesn't know you're doing it. Thn, following the final engage, when his blade has been drawn completely out of line, you thrust home against an essentially unguarded man."

"There's that, of course," said Cletus.

"Yes," said DeCastries, slowly, and waited for Cletus to look back at him. "Also, it seems a tactic pretty well restricted to the fencing floor, where everything's done according to set rules."

"Oh, but it can be applied to almost any situation," said Cletus.

Indeed it can. The military purpose of the tactics of mistake is not merely to win one battle, but to win the war by the strategic uncertainty that tactical deception engenders. Either your opponent ends up off balance and vulnerable to the final thrust, or, if he's smart enough to recognize the pattern yet unable to disupt it, he becomes frozen in place, incapable of decision since everything he thought he knew about the situation has turned out to be, more often than not, wrong.

This is called getting into your enemy's decision making cycle. See Boyd and OODA loop.
Posted by Dutchman6 at 9:37 AM

Infiltration tactics by conventional or special operations forces may be used extensively to cause chaos and confusion behind enemy lines. It works even better if you are already behind those lines working for him. Anyone out there?

Preempt, dislocate, and disrupt the enemy.

Tempo: Tempo as illustrated by John Boyd's OODA loop.
Schwerpunkt (focal point): The center of effort, or striking the enemy at the right place at the right time. According to vanCreveld, ideally, a spot that is both vital and weakly defended.
Surprise: based on deception.
Combined arms
Flexibility: According to VanCreveld flexibility means a military must be well rounded, self contained and redundant.
Decentralized command: Rapid changing situations may out pace communications. Lower levels must understand overall intent.

Any relation to the DORSAI IRREGULARS?

Trouble rather the tiger in his lair than the sage amongst his books. For to you the Kingdoms and their armies are things mighty and enduring, but to him they are but toys of the moment, to be overturned by the flicking of a finger . . .

I always intended to ask Gordy if he made that up or got it from somewhere, but I never did. Pity.

One thing about tactics of mistake is that it helps if you are fighting people who never studied the art of war. I rather prefer Moltke: no battle plan ever survives contact with the enemy.