Pity the poor Aryan, beset by Jews AND Christians. I guess the solution is to shoot up the Holocaust Museum. 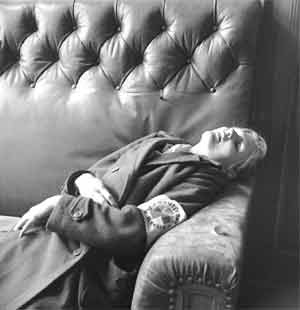 Done in by the "Jewish-Christian Conspiracy"? Nazi Suicide in Leipzig, April 1945. I guess Hitler had nothing to do with it. Photo by Lee Miller.

James von Brunn is not dead yet. They say he took two shots to the head. I guess that proves my Uncle Bill's theory that Nazis lack brains. ("Shoot 'em in the balls," was his solution.) Further proof can be found here. Thanks to Wretched Dog for the tip.

CHRISTIANITY and the HOLOCAUST.

As duped Aryan sheep begin to understand the "Holocaust" they also begin to better understand Christianity. Both have similar origins. Both have identical objectives.

Saul of Tarsus, after helping friends stone to death a disciple of Jesus Christ, set forth toward Damascus. As he trudged the dusty road a blinding, excruciating light suddenly crashed his brain. The world whirled into a crimson vortex. He heard his own scream, far away. Then there was quiet. When he awoke he was lying on the road. He looked up. A man in a white cloak was standing there his hands outstretched. His hands bore deep scars. Saul trembled with fright. Then Jesus smiled, pulling Saul upright, saying, "Fear not, Saul of Tarsus, I come to you from our Father." It was a miracle.

Saul and Jesus earnestly, fervently, joyously conversed with one another. Arm in arm they tarried there. Jesus told Saul he was his own. Jesus was loving, loving, forgiving, forgiving. Saul became his disciple there and then -- struck by the Holy Spirit. Finally, following Saul's vows of fidelity, love, and obedience, the visitation ended when, before Saul's wondering awe-struck eyes, Jesus to Heaven in a halo did rise. It was a miracle.

We are told that this extra-sensory experience, somewhat like an epileptic fit, suddenly changed the hateful, murderer Saul (later, St. Paul) from a hater of Jesus into a Jesus lover. Really?

Saul, ten years younger, had not met The Master vis a vis before Jesus' crucifixion. Had they met earlier Saul probably would have crushed Christ's head with a rock.

Saul, and most Israelis, detested Jesus and his blasphemous ideology almost as much as they detested Romans; more even than they detested Greeks, Babylonians, Assyrians, Canaanites, Egyptians, Persians, et al. In truth, as bigoted Judeophobes know, God's "Chosen People" hated their God's only Son.

Matthew emphatically states that Israelis so hated Jesus Christ that THEY crucified him (Pope John Paul II, Zionist, said that Matthew is wrong! What's that? "The Word of God" is wrong?).

ACTUALLY, on the road to Damascus -- brooding about Rome, relishing the bloody image of the disciple he had stoned to death; sweaty, sore footed, thinking of the blasphemous ravings of the Nazarene -- Saul had an incredible, earthshaking IDEA. A light-bulb inspiration. He, Saul -- a Roman citizen -- suddenly realized how he could destroy Rome! Saul trembled uncontrollably with fear and joy. He would simply promulgate the insane teachings of Jesus! What better way to destroy a Nation -- any Nation -- than to undermine her hubris; her gods, ethics, mores, history, her gene-pool -- in short, Saul would DESTROY ROMAN CULTURE. Then, as night follows day, with her foundations rotted, the Roman Empire would FALL. Saul decided to begin the HOAX by inventing a miraculous encounter on the road to Damascus with the reincarnated Jesus the Christ!

The New Testament was written in Greek. Paul - who believed the World was flat, that Joshua made the sun stand still, and Jehovah spoke from a burning bush -- wrote one-third of it, perhaps more. The events described in the 24 Books are often contradictory, fail the time-line, defy both archaeology's and nature's immutable laws, and are suicidal if practiced. Nevertheless, the shamans bought it, taught it, and the illiterate public was coerced, brainwashed, threatened, tortured, murdered, and enthralled. The Encyclopedia Britannica states that over 6,000 major redactions exist between the Septuagint (translation of Aramaic into Greek) and its St. James biblical translation.

The Gospels profess that only Christians may enter Yahweh's Kingdom of Heaven. To qualify, among other demands, Christians must LOVE THEIR ENEMIES (Jews); give away their personal belongings; eschew knowledge; judge not, despise nature, abandon earthly pleasures, acknowledge that all YHWH's children are equal; and above all else worship YHWH, the jealous, wrathful, vengeful, unforgiving, genocidal, anthropomorphic tribal god (Jesus' father) created by Hebrews in their image and likeness. Omnipotent, omniscient YHWH promises Hebrews that they alone shall inherit the earth, that it is commendable to steal from Gentiles, better yet -- kill them.

Whereas Gentiles, if they fail to worship YHWH, are transported straight to Hell. And it is written, "A little child shall lead them."

These dangerous, imbecilic, concepts, tenets, and teachings, often treasonous, DESTROYED the Roman Empire and drenched the soil of Europe with Aryan blood for almost 2000 years!