This Hero had quite some time to get acquainted with the bullet that had his name on it. 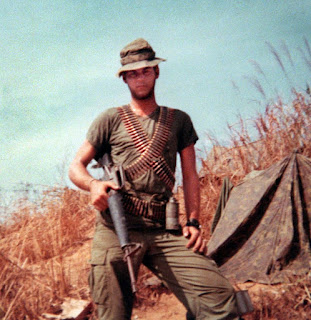 Sent in from Mr. Peters.  Much appreciated, but I apologize I could not have been more timely in getting this out to coincide with Memorial Day.

Ghandi was once quoted as saying, "The greatness of a nation can be judged by the way its animals are treated".  I would add that the level of civility can also be measured in how the society rehabilitates its war wounded.  PFC Michael Fray caught a bullet near Chu Lai, Veitnam in July 1969. The bullet lodged in his neck; a wound that should have killed him, (especially given what we now consider to be quite crude methods of combat medicine), left him instead a quadriplegic.

“I always admired him for his perseverance and attitude,” said Becky Ballard, an occupational therapist who recently retired from the VA after working with hundreds of spinal cord injury patients, including Frey. “The will to live is strong, but not as many people had as many obstacles as Mike.”

What I find amazing is how we hold so jealously to the last dying embers of life and will continue to fight for it despite the endless road blocks, detours. and setbacks life gives us.  I think this is especially true for people, not necessarily Soldiers, but people that have overcome tragedy and trauma.  We fight for every last minute because the alternative is to surrender to it.  Yes, we all will not make it out of this alive, but we will give everything, every minute of every day, to make it count.

I admire his fighting spirit!
May he RIP.

Jesus wept. And so did I.

"You know, one day we each will die."

"That's true, but every other day we won't."

Our own Joshua Lawrence Chamberlain of Gettysburg fame took a bullet in the bladder at Cold Harbor, and it almost killed him. a local paper even published his obituary. Yet he survived to conquer at Little Round Top. As reported in Ken Burn's The Civil War, Chamberlain finally died in 1914 from the lingering effects of the old wound from 50+ years before.