Now THIS is funny. 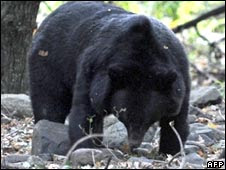 The bear population has grown in Kashmir in recent times

My thanks to typeay for forwarding this:

A bear killed two militants after discovering them in its den in Indian-administered Kashmir, police say.

Two other militants escaped, one of them badly wounded, after the attack in Kulgam district, south of Srinagar.

The militants had assault rifles but were taken by surprise - police found the remains of pudding they had made to eat when the bear attacked.

It is thought to be the first such incident since Muslim separatists took up arms against Indian rule in 1989.

The militants had made their hideout in a cave which was actually the bear's den, said police officer Farooq Ahmed.

The dead have been identified as Mohammad Amin alias Qaiser, and Bashir Ahmed alias Saifullah.

News of the attack emerged when their injured comrade went to a nearby village for treatment.

"Word spread in the village that Qaiser had been killed by the bear," another police officer said.

A joint party of the police and army personnel went into the forest and collected the bodies of the two militants.

Police say they also recovered two Kalashnikov assault rifles and some ammunition from the hideout.

Wildlife experts say the conflict in Kashmir has actually resulted in an increase in the population of bears and leopards.

Following the outbreak of the insurgency people had to hand in their weapons to police - which put a halt to poaching.

As a result, there has been a greater incidence of man-animal conflict, say experts.

There have been many reports of bears and leopards killing or mauling humans in different parts of the Kashmir valley in recent years.

Three years ago, residents of Mandora village near the southern town of Tral, beat a black bear to death which had strayed into the village.
Posted by Dutchman6 at 6:58 PM

I'm having a difficult time typing this, with a case of the gigglefits. Couldn't have happened to a nicer bunch of a**holes.

As the saying goes, "Sometimes you eat the bear, sometimes the bear eats you."

I hope, that at the very minimum, as a reward, the bear got to keep (& eat) the insurgents he killed. And keep the guns & ammo & whatever else they dropped.

Remember, we must always protect and defend "the right to keep and arm bears."

(You may all groan in unison now)

A fatwa will probably be issued against the bears.

If the bear got one of the "assault" rifles when he left, then does that mean they have the right to keep and arm bears?

If you're a liberal, this is a really tough one. Do you pull for the bears (which are surely endangered or threatened) or Islam (which means peace)? Enquiring minds...

The bear or the pudding was probably sent over by George Bush. I'm sure Pres__ent BHO II will be over there shortly to apologize.

Two courses of tasty insurgent with pudding for dessert?


Capcha: unded Um no, they're all the way dead. Heh.

A lesson learned. Hand in your weapons to the gov, get eaten by a bear due to less hunting.

Glad Anonymous got it.

I'm figuring the bear didn't finish the meal because all the curry gave 'im the squirts.

He had to go lick his rear for a while to get the taste out of his mouth...