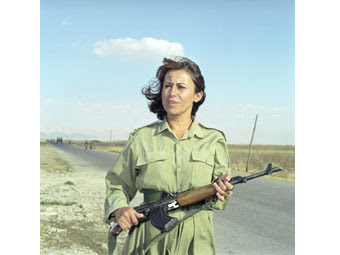 Peshmerga, Peshmerge or Armed Forces of Kurdistan (Kurdish: Pêşmerge or پێشمه‌رگه ‌‌) is the term used by Kurds to refer to armed Kurdish fighters. Literally meaning "those who face death" (Pesh front + marg death) the Peshmerga forces of Kurdistan have been in existence since the advent of the Kurdish independence movement in the early 1920s, following the collapse of the Ottoman and Qajar empires which had jointly ruled over the area. Peshmerga forces include women in their ranks.-- Wikipedia. 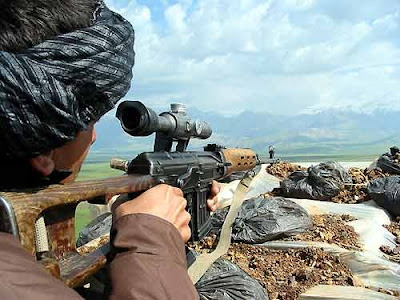 When my son came back from OIF1, he brought me a Peshmerga headcovering (kufiya) which is close in pattern to the one on this guy's head above. Matt is a big fan of the Kurds. It was given to him by a Peshmerga fighter just for being an American soldier. Americans, except for Woodrow Wilson who sold the Kurds out to British and French imperialism in 1919, are very popular in Kurdistan.

Anyway, Matt showed me how to wrap it around my 7 and 3/4 Charlie Brown head and I must say I looked stylish. I keep it in my collection next to the South Vietnamese Ranger jacket.

Here's a link from 2007 about the Peshmerga: http://www.michaeltotten.com/archives/001412.html

Anyway, I was looking through my stuff on Kurds (they figure in Absolved's final chapters)and found this Kurdish proverb.

Literal Translation: "Death on your feet is better than life on your knees." 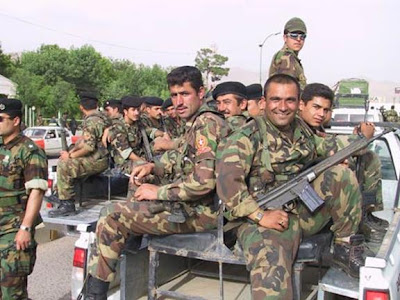 Just thought you would appreciate the comment, I was watching a re-run of the original miniseries "V" the other night.

There is a scene where an elderly lady walks by one of the visitors ships and tosses a Molotov cocktail inside and it made me smile and think of this site.

Should things ever get that bad here, I would imagine that similar things would happen.

"Better to die on your feet, then to live on your knees."
I know I've heard that proverb before, from another source, or sources. Anyone know where it originated? Or is it one of those Universal Truths that spring up anywhere & everywhere that there are free people?

Here's an interesting article on the Kurds regarding the Iraqi war, http://faciamus.blogspot.com/2006/11/kurdish-key-to-middle-east.html

I remember the Kurds ran TV ads thanking the USA for our help liberating them from the guy in the hidey hole.

Although I have never had the occasion to learn it firsthand, I have heard for years that the Kurds and also the Sikhs, embody the best qualities of honor and loyalty that one sees in modern warriors; I am glad you devoted this article to the Kurds.

I knew their was a reason I liked the Kurds.