Zeitgeist: Germans are being told to hoard for...reasons 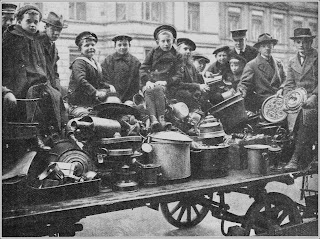 In Germany, both the social and main stream medias have been alive with talk of recommending that citizens begin to gather in earnest the Government recommended two weeks worth of supplies for a potential bad day in the future.  News sources switch between outright saying it is for potential war, (though with whom is even more fuzzy). and being more pragmatic say it is simply for a natural disaster.  It should be noted that Germany is not exactly known for its catastrophic tornadoes or earthquakes, but it it certainly prudent advice none-the-less.

I could not find an official release from the German government which would have promoted this recent bout of panic buying.  From what I have been told, the last time that this was an issue was in 2005 during a mass power outage in certain areas of the country.

This summer has not been nearly as festive as it has been in the States in relation to its feral population, but it just may be that they are slow starters.  The Russians are still eyeballing Latvia, Lithuania, and Estonia, so there is that too.  Time, as they say, will tell.

Edit:
Finally, I have found an English version of the story.  This one comes from Deutche Welle.

Report: Germany to require citizens to stockpile supplies in case of catastrophe

"A civil defense plan to be debated by the cabinet would require citizens to stockpile supplies in case of a catastrophe. The plan says people should prepare for an unlikely event that "could threaten our existence."

For the first time since the end of the Cold War, the German government plans to encourage its citizens to prepare for a catastrophe or armed attack by stockpiling food, water and other supplies, the "Frankfurter Allgemeine Sonntagszeitung" reported on Sunday.

Citing the government's "Concept for Civil Defense" paper to be discussed by the cabinet on Wednesday, the government will require people to stock 10 days worth of food and five days of worth of drinking water.

The civil defense strategy would require citizens to have a sufficient supply of food, water, energy, money and medicine to wait out a period until the state would be able to initiate a response to a catastrophe or attack.

A spokesperson from the interior ministry declined to comment on the contents of the paper until a Wednesday press conference.

The 69-page report said an armed attack on Germany was unlikely. However, as a precaution people should "prepare appropriately for a development that could threaten our existence and cannot be categorically ruled out in the future," FAS quoted the report as saying.

The civil defense strategy was originally commission by a parliamentary committee in 2012, but its release comes amid a raft of new security measures in the country.

When any gov has to inform the public they preside over to stock up supplies for any reason they, (that gov) deserves a gold metal. Why you ask? Because that gov has breed and has allowed the breeding of people who believe Santa-Claus lives in an, protects the adult world. The bulk who walk this earth today can not feed or think for their self's. Thinking out of the box is a concept that was killed off with the advent of TV & latter items. It matters little what you do anymore it's not "YOUR" fault so says the leaders of the herd. In the words of the most interesting man alive,...Die suffering my friends. However remember this before you go, you live of, and die, by "YOUR" choices. Why do I want to be one of the last standing, you ask? I have a message I'd like to convey in person, to those who inked the start of the final battle,... B-4

I might be alone in this, but I wonder if this is just a case of the Head Grasshoppers requiring the Ants to stockpile food, so that the Grasshoppers, and their foreign Locust cousins, have a guaranteed store of food to loot.

I guess the really mind bending question is, in light of how bad life really
is in Germany due to the muslim invasion, "Why Now?" and why did Frau
Comrade Merkel not go on the media and publicly state this, why did it have
to be nameless faceless "government officials".....?

The mackerel is stinking rather badly this morning..but its smelling like
that in the USA too these days.

Interesting that the German Govt is telling it's citizens to stockpile two weeks of food but only one week of water, does this mean they expect to take the additional week of food for others? Does no good to stockpile supplies if you do not have the ability to defend what is yours!
Survival of the fittest