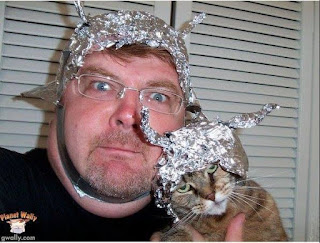 A very poorly made Memorandum for Record has been making its way around the patriot social media knitting circles. Some are even buying into its validity.  If I may, I would like to lay those fears to rest. 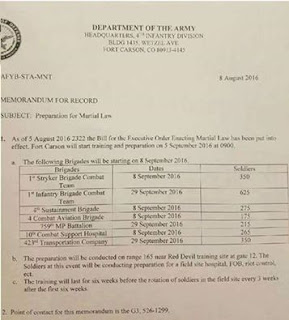 Let's start with what is wrong with this:
I have never been to Fort Carson, so I cannot speak to where it conducts its training.  This seems to be a moot point, however, because of the obvious garbage that the document is.

Seriously, I could go on, but what would be the point?  This is simply the latest in the long ling of dis-informative garbage that some people take as gospel to simply have something to talk about.

Oh, yeah, what is the referenced bill?  Mr. Woody W. Woodward (W3) was so kind as to provide the leg work on digging it up.

Directs DHS to report on: (1) the personnel needs of the Federal Protective Service (FPS), including recommendations on the numbers of FPS law enforcement officers needed to carry out the mission of FPS during the 10-year period after the enactment of this Act, and (2) the best method of funding for the FPS.

This is the cite for the report on 2016’s HR4487 which is the replacement bill for HR2322 of 2015. The best I can tell it’s been passed in the House and forwarded to the Senate. I’ve, so far, been unable to determine if it has passed the Senate. I am acquainted with an employee of DHS who has told me that the DHS has changed FPS contracted security guards’ badges to read something like “federal police officer” and that for all practical purposes the FPS guards stationed at social security offices and other federal offices are now police officers.

‘‘(A) CARRYING OF FIREARMS.—The Secretary may authorize contract security personnel engaged in the protection of buildings and grounds that are owned, occupied, or secured by the General Services Administration Public Buildings Service to carry firearms to carry out their official duties.

‘‘(B) DETENTION WITHOUT A WARRANT.—A person authorized to carry a firearm under this subsection may, while in the performance of, and in connection with, official duties, detain an individual without a warrant for any offense against the United States committed in that person’s presence or for any felony cognizable under the laws of the United States if that person has reasonable grounds to believe that the individual to be detained has committed or is committing such felony. The detention authority conferred by this paragraph is in addition to any detention authority provided under other laws.

Did you see anything in there about Martial Law?  Me neither,

No doubt that the image is a fake...but you are wrong about one point.

The 423rd Transportation Company IS, in fact, a real USAR unit, based at Fort Carson in El Paso County, Colorado.

Google is your friend....

I could not find any reference to it with a simple Google search. That being said, it certainly does not mean that they are not on the books, and I do not doubt your Google-Fu is superior to my Google-Fu.

Even so, it is not the exception that disproves the rule that the document is garbage, through and through.

Fort Carson is big enough to warrant it's own wikipedia entry:

Just FYI the 2322 is supposed to be a timestamp, not the bill number.

Keep up the good work.

Oh, noooo... Armed arrest and detention without warrant by any and all fedgoons to include 'contractors' and by "fusion" includes "local" leos certainly merits no mention alongside martial law.... Why pish and tosh Old Boy! Perish the thought!

Armed guards at federal buildings is nothing new. They have been there for years. What we have is a government afraid of it's own citizens.

I believe I said "No doubt that the image is a fake"...so, I am not arguing that point at all. But, you may want to work on your fact finding skills...just saying.

Everyone of these links speaks of the 423rd...either directly or mentions them in the dialog.

We still get FEMA camps don't we?

Otherwise my retirement plans have a serious flaw.

What kind of sick F makes up a memorandum like that? Either someone truly demented...or it's part of a government disinformation campaign.

You're seeking out records on the best abs work out, then please examine on. I bet you're thinking that crunches are Exoslim the manner to head if you need rock difficult abs. In actual reality, crunches are one of the worst abs sporting activities you may carry out! In this article, i'm able to display you some of the confirmed physical games that you may get far higher results from, and point out some different key additives. For more ==== >>>>>> http://greentheorygarcinia.com/exoslim-garcinia-cambogia/

Great job Dutchman, dispelling more chicken-little "patriot" movement garbage. Seems we spend more time trying to sort all the fodder than we do working toward any discernible goals. TOWR is putting together a class on deception detection that all could benefit from.