Bad Ass of the Week - Patton 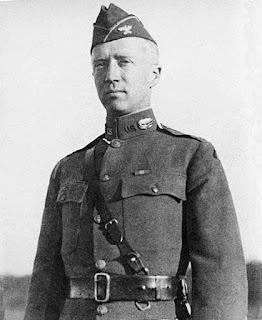 
Legend has it that Gen. George S. Patton earned his “Old Blood and Guts” nickname for having a lust for battle without regard for the lives of his troops.

But the reality of Patton’s genius is quite the opposite; he produced more results in less time with fewer casualties than any other general in any army during World War II, according to Patton biographer Alan Axelrod in the American Heroes Channel video below.

“He wanted his officers who he trained to know what they were going to expect in battle,” said Axelrod. “He [Patton] said to them, ‘you’re going to be up to your neck in blood and guts.’ This made quite an impression, and it stuck and from that point on, he was known as ‘Old Blood and Guts."

Still, high operational tempo and strict adherence to the rules pushed his men to the breaking point and hurt morale in the ranks. A common GI saying about Patton was, “our blood, his guts.”

The general’s low point came in August 1943 when he slapped two shell-shocked soldiers under his command for crying. For this, Gen. Eisenhower deemed him too undisciplined to lead the Normandy invasion, so he placed Patton in charge of a “ghost army” at Pas de Calais, France.

He was a decoy, and the Nazis took the bait; after all, they considered Patton the Allies’ best commander. Even weeks after D-Day, the Germans continued to wait for Patton’s crossing at Pas de Calais amassing troops for the fight.

Asshat, not bad ass. Search "bonus army".
Screw him and Eisenhower and MacArthur.

While he was undisputedly a tactical and strategic genius, I lost any respect I had for the man when I found out he was involved in the attack on former service members during the Bonus Army incident in 1932. The same goes for McArthur and Eisenhower. https://en.wikipedia.org/wiki/Bonus_Army

and it was Patton, Eisenhower, and MacArthur who burned down the Bonus Marchers camp.

Well, I know this is NOT politically correct, BUT we would have lost WWII without him.
I would want him on our side now.

Patton was a martinet ... and a military genius. There are two seminal books on the man: "War As I Knew It", and "Patton: A Genius For War".

There are other books about Patton, and many references. But these two give you a good understanding about the man, more than the commander.

The movie "Patton" is not a good portrayal (he had a high pitched voice, not congruent with George C. Scott rendition) but it is based on "War As I Knew It".

He got a lot of men killed, and that was his accepted price for victory. "Who Dares, Wins!" could have been his motto. And yes, we would not have had such a clear cut victory in WWII without a Patton.

Patton never looked at the price; he focused on the desired outcome. If you want a better motto than "Who Dares Wins", you can consider "Whatever it takes ... any thing at all!" to have been Patton's true goal.

In reference to the Bonus Army cleared out by using the military - so much for Posse Comitatus..

This choice of yours is really confusing being your supposed to be a 3%er. As pointed out by others his role in using military forces to attack Americans on American soil disregarding the laws makes him a criminal as those who gave the orders.
He wasn't in the State National Guard during this role he was active duty army.
Please explain

Not 100% sure but I believe Posse Comitatus does not apply in the confines of Wash. D.C.