With a tip of the boonie hat to Brian F. for the link to the video.


The De Lisle carbine or De Lisle Commando carbine was a British carbine used during World War II. The primary feature of the De Lisle was its very effective suppressor which made it extremely quiet in action.

Few were made as their use was limited to special military units.

The designer was William De Lisle. It was based on a Short, Magazine, Lee-Enfield Mk III* converted to .45 ACP by modifying the receiver, altering the bolt/bolthead, replacing the barrel with a modified Thompson submachine gun barrel, and using modified magazines from the M1911 pistol. The primary feature of the De Lisle was its extremely effective suppressor, which made it very quiet in action. So quiet, in fact, that working the bolt to chamber the next round makes a louder noise than firing a round.[1] The single-shot, bolt operation offered an advantage in that the shooter could refrain from chambering the next round if absolute silence was required after shooting. A Semi-automatic weapon would not have offered this option as the cycling of the bolt coupled with rearward escaping propellant gas would produce a noise with each shot.

The De Lisle was made in very limited numbers; 129 were produced during the period of 1942 to 1945 in three variations (Ford Dagenham Prototype, Sterling production and one Airborne prototype). Thompson submachine gun barrels were modified to provide the .45 calibre barrel, which was ported to provide a slow release of high pressure gas.

The suppressor, 2 inches (5.1 cm) in diameter, went all the way from the back of the barrel to well beyond the muzzle (the suppressor makes up half the overall length of the rifle), providing a very large volume of space to contain the gases produced by firing. This large volume was one of the keys to the effectiveness of the suppressor. The Lee-Enfield bolt was modified to feed the .45 ACP rounds, and the Lee-Enfield's magazine assembly was replaced with a new assembly that held a modified M1911 magazine. Because the cartridge was subsonic, the carbine was extremely quiet, possibly one of the quietest firearms ever made.

The De Lisle carbine was used by the British Commandos and other special forces during World War II and the Malayan Emergency. It was accurate to 250 metres (820 ft). -- Wikipedia. 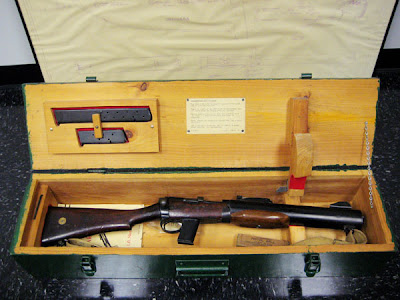 Remarkable! In the 1st video (I watched the others on the DeLisle that were offered) I could hear the little ping of the firing pin spring working.

With the knowledge of how the original was crafted, it would appear that an enterprising gunsmith (shadetree or licensed) today could fashion something similar from available parts. Could be REALLY useful in the early days when the oath-breaking loyalist troops were still convinced of their own invincibility.

I wonder if a full-barrel-length suppressor would produce a similar effect for an existing bolt gun. Wonder how loud the sonic boom from a round as small as a .223 or even .308 would be. Might be worth experimenting with. As was noted, this would only work with bolt guns. Any semi-auto would be louder due to the mechanism cycling and gasses escaping rearward.

It was interesting to see my gun in the article. I had it built for me in about 1998. It was not suppressed at that time. I cased it in the Brit style and added the accessories incl the manual, allen wrench, etc. It was a sweet gun but I sold it on G'broker a couple of years ago.
boyce42@msn.com

In the video, we hear standard loud rifle fire, and then the DeLisle.

The firing pin hitting the primer and the bolt cycling quickly by hand seemed louder than the "pufff" of the shot. This could be affected by the AGC audio circuit on the video camera.

What a neat weapon. Totally out of my price range, not even counting collectable tax stamps.

Niiiice! Judging from the reaction at the end, appears to have had a squib round. ;-)

By the way, subsonic rounds like the .45 ACP are supposedly "invisible" to shooter detection systems that rely on sonic booms:

If you need to have one, go here:

Richard (the guy who owns SIA) generally uses No4 actions for these rifles, but functionally, they're the same.

Check out http://www.coastalgun.com At the "Hear Them" section, the LRT 762 shows 2 shots with supersonic 308 followed by 2 shots of subsonic ammo. It was a wake-up call for me to research some more for "big boy toys"

During the Falklands Punchup the British Government went around to several museums picking up their DeLisle Carbines for Arsenal Rework and reissue to front line units.

Another interesting concept is the Thompson Center SBR in .300 Whisper--a good example of the "pocket rifle" genre. :^)

I just saw this article- The Delisle's I have used were very nearly silent- on firing, the hammer drop is all that can be heard from 20ft- from 100ft, it is undetectable.