The New "Gunwalker Man" Children's Book, "Our Department of Obstructing Justice," The Guiding Hand & "Eric Holder, Another Day Another Denial." 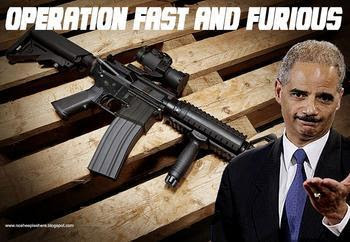 Also, sharp-eyed readers will note from the right sidebar that we came out with a new edition of the childrens' book, "The Gunwalker Man." Ken Melson no longer graces its cover. This is because, frankly, he has stopped running and is now, more or less, awaiting his fate meekly when they finally get around to calling him to hearings under oath. Eric Holder, on the other hand, is still "run, run, running" as fast he can. It just seemed time to have a new cover. 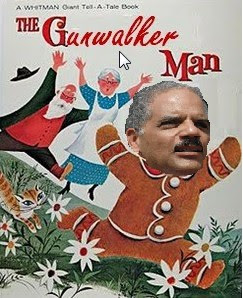 Meanwhile, Bob Owens at Pajamas Media hits another one out of the park.

The depth of the scandal dramatically widened yesterday. . .

Every American, regardless of political ideology, should be livid that the FBI gave at least $70,000 of “seed money” to murderous felons so that they could buy firearms. The FBI knew these weapons were destined for narco-terrorists, and that they would be used to target not just other murderous cartels but to terrorize innocents.

The third weapon recovered at the scene of Agent Terry’s murder that the FBI made “disappear” is an SKS carbine. Not an assault weapon by any practical definition, authorities claim that the official existence of the Texas-purchased rifle at the crime scene could have exposed an FBI informant.

Another plausible motive for hiding the weapon is that it would be traced to a different ATF operational sector, as an early indication that gunwalking was not limited to Operation Fast and Furious in the Phoenix Field Operations area. We now know as a matter of fact that all three federal agents shot with walked firearms had weapons walked from Texas recovered at their crime scenes. Immigration and Customs Enforcement (ICE) Agents Jaime Zapata and Victor Avila were ambushed in Mexico by members of the Zetas cartel, including at least one armed with a weapon from Lancaster, Texas, the Dallas Field Operations area.

The SKS “disappeared” by the FBI from the scene of Agent Terry’s murder most likely came from Dallas, but could have come from what appears to be a second Texas-based gunwalking operation, suggested by considerable circumstantial evidence to be centered in the Houston Field Operations area.

The fact that every U.S. agent gunned down in the line of duty was fired upon with weapons recovered from apparent gunwalking operations in the Dallas and/or Houston Field Operations areas — not to mention the revelation of an domestic gunwalking operation in Indiana dubbed “Gangwalker,” and now “Grenadewalker” — suggests a widespread program to arm violent felons.

If this supposition is correct — and new evidence emerging every few days suggests that is the case — then we are plagued by an executive branch gone mad, and there is every reason to believe that such madness either originated from the White House or was done with the full knowledge of the White House, as Mike Vanderboegh suggests:

“This information confirms what our sources were saying all along — that the FBI was covering up the true circumstances of the murder of Brian Terry,” added Mike Vanderboegh, an authority on the Fast and Furious investigation who runs a whistleblower website called Sipsey Street.

“It also confirms that the FBI was at least as culpable, and perhaps more culpable, than the ATF in the (Fast and Furious) scandal, and that there was some guiding hand above both these agencies (and the other agencies involved) coordinating the larger operation,” Vanderboegh said.

Robert Mueller of the FBI and Ken Melson of the ATF obviously knew of these gunwalking operations. Michele Leonhart of the DEA likely knew. Eric Holder had to know.

Janet Napolitano, whose former Chief of Staff Dennis Burke ran Operation Fast and Furious and who was the governor of Arizona and its attorney general before then, had to know.

LATER: Also see "Eric Holder, Another Day Another Denial."
Posted by Dutchman6 at 6:47 AM

Sounds like tampering with evidence. What did Eric Holder and Barak Obama know and when did the lying sons of a bitches know it?

Speaking of denial and deniers alongside their obstruction....


“The frustrations are real,” said Representative Elijah E. Cummings of Maryland, who was the state chairman of Mr. Obama’s campaign four years ago. “I think we know that there is a Barack Obama that’s deep in there, but he’s got to synchronize it with passion and principles.”

But then there is this -

To reassure nervous Democrats, the president’s campaign aides are traveling the country with PowerPoint presentations that spell out Mr. Obama’s path to re-election. Their pitch is that Mr. Obama’s appeal has grown in traditionally Republican states like Arizona, where there are fast-growing Hispanic populations, and that Republicans have alienated independent voters with “extreme” positions on popular programs like Medicare.

I thought of another potential reason for with-holding that gun.
What if it was the only one that smelled as having been recently fired?
Hiding the most likely murder weapon would make positive ballistic ID unlikely.