"Black Wednesday." Melson on suicide watch? Or just about to roll? Hearing revelations hit fifth floor of ATF HQ "like a bomb." 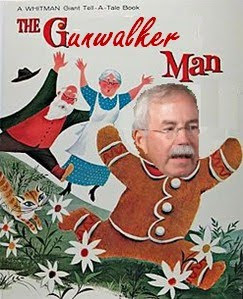 Heard from two sources today that the revelations at yesterday's hearing (dubbed "Black Wednesday" over at CleanUpATF.org) about Acting ATF Director Kenneth "Gunwalker Man" Melson hooked into Internet video of the Lone Wolf Trading Company hit the Fifth Floor of ATF HQ "like a bomb."

One source said, "Melson looks like he's been suckered punched and then run over by a Mack truck." He added, "I hope they've got him on suicide watch."

Another repeated a rumor to the same effect and then added, "The whispering is that he's ready to roll. He's been waffling back and forth on the decision for months, but the thinking is that this latest stuff at the hearing will push him into Issa and Grassley's lap. He's the (administration's) designated goat, he knows it, and he really doesn't have much choice."

Well, Ken, all I can tell you is if you want to roll and don't have Grassley's number, give me a call. I'll be glad to help you out. I've got Sharyl Attkisson's number too.
Posted by Dutchman6 at 2:15 PM

Run run as fast as you can!

Hope he doesn't hurt himself, that would just be a shame. I'd prefer him in sent up to the big house for life since he's has the blood of Brian Terry on his hands. I'm sure they'd treat him real fine up there.

Let's not be naive. Of course he has a choice. It's the same one he's had for months: he can live up to his oath, tell the truth, help reveal a terrible wrong perpetrated by the government against the citizens, and take his lumps like a man ... OR ... he can act like a lying weasel, conspire with his fellow perps in concocting coverup stories, lies and sping, and try to sell it with the help of the Obama-complicit media. And, he can even take one for the team and be fired or forced to resign.

In which case he will take a quick spin through the revolving door and be hired by some administration-connected entity, perhaps in the security field.

Looked at from the point of view of connniving coward with no sense of right and wrong - the second optoin is the only one worth consideration.

So that's what he's going to do.

Love the Gunwalker Man graphic...did a Gunwalker related graphic back in February that seems even more relevant now.

Look around, if you don't know who the mark is...

I may have missed it but I haven't seen anyone propose the thought that some of these weapons weren’t bought by some random straw purchasers but really ATF agents to increase the numbers of weapons supposedly going south. I still have a hard time believing that that many weapons are purchased here and taken south when the prices here in the States are 20% to 100% more expensive then what they pay in Mexico or even further south.

I'd suggest that he avoid one-on-one meetings in Hillery's office and stay away from DC parks. And considering the nitwh's Chicago background, he might want to avoid white house invites as well.

All this has been covered, weeks ago!

Check out the archives !!