Praxis: Waste not, want not. Recycling worn out BDUs. 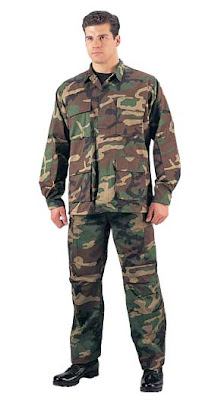 The Battle Dress Uniform (BDU) was the military uniform that the armed forces of the United States used as their standard uniform for combat situations from September 1981 to April 2005. Since then, it has been replaced in every branch of the U.S. Military, and on April 30, 2008 it officially became unauthorized for wear in the United States Army. BDU-type uniforms still see active use in other nations, and are still worn by some police who may work in tactical situations, such as the DEA and SWAT. -- Wikipedia.

Here in Alabama, most of the new units I'm aware of standardize on Woodland pattern BDUs (Battle Dress Utility). This is true partly because it is cheaper and easier to find than other patterns (the thrift stores being loaded with them) but mostly because it is a good pattern year round for the South. (Yes, I know there are better patterns, but what we're talking about here is price and availability for newbies who lack funds.)

But BDUs, like everything else, wear out. I teach my newbies down here to recycle as much of the old uniform as possible.

For example, the first thing you should do is cut off all the buttons.

It is always a good idea to carry a couple of extra buttons in a small sewing kit for field repairs, and while you can pick up buttons for about $8.00 a hundred on line, there is no point in buying them if you can get them free.

I tell folks to save the cloth that is still serviceable for repairs. You can also make draw-string bags out of serviceable sleeves and pants' legs.

Some guys I know take the tattered cloth and make camo strips out of it, attaching them to harnesses, etc.

Superb advice, Mike. My wife was always kidding me about saving the buttons off my camo shorts and cargo pants until I showed her the rather large box of them I have. Now I have her saving the buttons and things off her clothing before she tosses it. It only takes a few minutes, and you wind up with a bunch of free 'spare parts', and useful shop rags.
I also do the same with electronic stuff before I send the carcass to the recycler. Anything that's not damaged, and still usable like hardware, connectors, switches, lights, etc, gets put into my "stock".
Use it up, wear it out, make it do, or do without!

When my oldest was thirteen (almost ten years ago), she managed to tear up a couple pairs of BDU pants. Being an enterprising and frugal young lady, she turned those worn out pants into a couple of purses, one in woodland and one in chocolate chip desert camo. Her husband now uses one of those purses as a hunting possibles bag.

Save the pockets and use them as pouches inside your ruck. I use them for loose ammo, cleaning kit, and other possibles.

Don't forget to salvage zippers and velcro from worn out clothing. Even badly worn clothing of this type can be cut into strips and braided into very sturdy, serviceable rugs.

If you toss old shoes, remove the laces unless they are badly frayed.

This is the TRUE Marine Corp motto!

I've done the same with the legs of old jeans. I cut them as long as I can, stitched the bottom cuff closed (yes I can hand sew and use a machine) and cleanly cuffed the top so a drawstring can be added if needed. They make good gun padding bags when carrying a couple in a single case or could be stuffed with leaves and folded over or drawn closed for a field expedient pillow,lumbar support or as a stuff bag for various items like gloves, scarf, hats, socks ect.

Very good advice, especially with the times ahead.

The bags--If you get a bit of nylon webbing you can set it up for a shoulder bag, or put a few loops on one side of the opening, a stiffener, and make a mag drop bag, or something like that. Be creative.

Be sure to cut the leg off below the cargo pockets. If the pocket is positioned right, you can cut it off again just above the pocket, and this gives you a bag with a pocket--on a shoulder strap like above, this might be useful.

Drjim mentioned shop rags, not sure how well BDU material would work for that. Also don't forget the ever present ghillie suit scraps.