Houston media begins to do its job. ATF Houston FD lacks one honest man like John Dodson. Big story opportunity for some reporter worthy of the name. 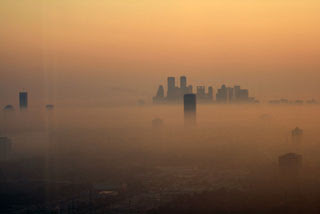 Houston skyline in a sea of fog. There's one helluva big national story out there for some local enterprising reporter worthy of the name.


This is a repost from Saturday because it is so important, with additional commentary.

A notable trend is that Houston seems to be a main purchasing location for people intending to traffic guns to Mexico. A majority of guns recovered in Mexico originated in Houston, as visualized by the red lines that converge on the city. Of those purchased in Houston, a strong majority were Bushmaster .223 rifles and FN Herstal Five-Seven pistols.

Next maybe we can get them to start sniffing around the Houston Field Division offices.

Here's one: "If Houston is the largest single source of civilian market firearms in Mexico, then is the Houston Field Division SAC and all his silent-as-a-Mexican-grave employees merely grossly, impossibly, hopelessly incompetent or were they too walking guns?"

This is a "big story" job opportunity for some reporter worthy of the name. In addition to Tampa, the details of the Houston operation will break this story out of the little Phoenix box that the administration and its lapdog media want to restrict it to.
Posted by Dutchman6 at 4:45 AM

Of course, what's entertaining is that one or more of these bastards has been filling out insurance requests in my name. Guess we'll have to see what happens, eh?